Another tuning utility for AMD's latest generation Ryzen processors is coming soon, and it is being built by Yuri Bubily (@1usmus on Twitter), the same developer who made and maintains the popular Clock Tuner for Ryzen (CTR) software, as well as the DRAM Calculator for Ryzen program (also popular). The upcoming utility is currently called Project Hydra.
It is not clear if the name will change when a polished version manifests. However, Yuri did make clear that this is intended as an overclocking sandbox specifically for Ryzen processors based on AMD's Zen 3 and Zen 3+ architectures. Zen 2 owners, meanwhile, will have to stick with CTR or AMD's own Ryzen Master utility. 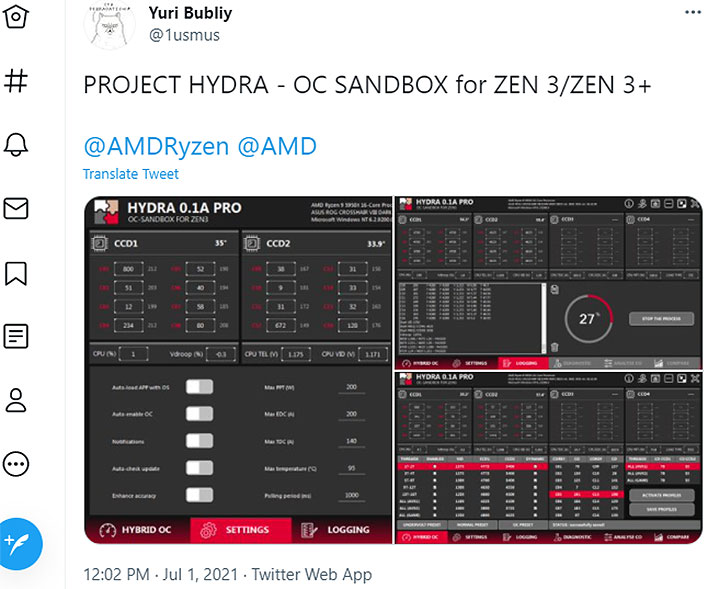 Yuri shared a few screenshots on Twitter of the utility in development, but did not go into any kind of detail in the thread. However, Yuri provided a bunch of information to Steve Burke at Gamers Nexus. One of the more interesting tidbits is a claim that a key advantage of Project Hydra over Ryzen Master is it carries a lower risk of turning a CPU into a paperweight.
"The chance of damaging a processor with this program is lower than with AMD's own Ryzen Master (it does not use PCI mutex and this can be the ideal weapon to destroy processors," Yuri explained to Steve Burke at Gamers Nexus. "Hydra users PCI mutex, hardware mutex SMU and also checks command integrity. PCI mutex is a means of protecting the commands from being overwritter or modified. Ryzen Master does not have this protection."
So how does the magic happen? Yuri explains that Project Hydra communicates with the SMU over the PCI bus without blocking it. The utility then makes frequency and profile changes based on the data it receives. And according to Yuri, the utility is nimble—it only consumes up to 100MB of RAM and 0-1 percent CPU usage. 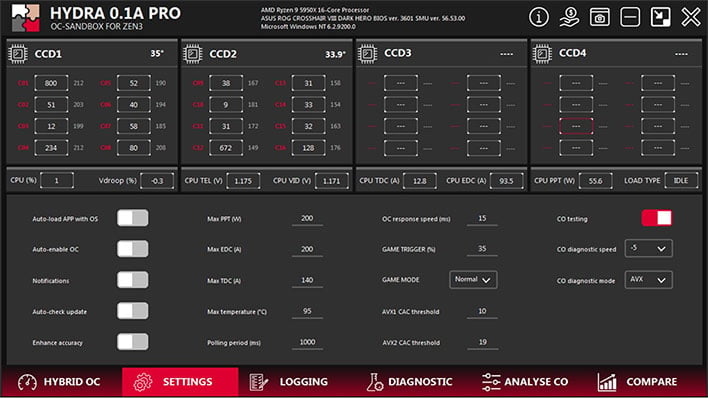 Project Hydra has the ability to make 1mV adjustments, whereas Ryzen Master offers 3-6mV changes. That that boils down to is more fine grain control. It also features a new user interface and a more compact design, along with a host of other benefits. Here are some them...
Notice the mention of a Pro version in the final bullet point. Yuri says the Pro version is functionally similar to the regular version, except it offers automatic updates and an unlocked CO.
"That is, for example, the user bought a good CPU, he tested it and saw that it has a huge frequency margin—to realize this margin, he will need the Pro version," Yuri explains. "If a user found out that his processor has a low frequency margin, the standard version will be enough for him to get the maximum performance."
The Pro version will also come with additional support and earlier access to new features. Yuri did not say how much the Pro version will cost, but depending on the price, it sounds like it could be a worthy investment for Zen 3/Zen 3+ owners who want to wring the most performance out of their CPU, especially if it works as well (and even better) than CTR.
We will be keeping an eye on this and will pass along more information as it becomes available.