Have you been trying in vain to score a PlayStation 5 or Xbox Series X console? What about a Nintendo Switch OLED, or a rare set of kicks from Nike? There is just not enough to supply of these and other items to meet demand, in part because scalpers are so quick on the draw. But don't blame it on bots, says a 24-year-old who has made a business out of reselling game consoles and other items at high markups.
His name is Jack Bayliss and he owns Aftermarket Arbitrage, a site that tracks retail stock of hard-to-obtain items. Subscribers who pay £30 per month for the service's "industry leading restock monitors" and other perks, such as live 24/7 support. And those who shell out a discounted £300 annual rate receive additional benefits, such as auto-checkout services and weekly giveaways.
That such a service exists (and probably others like it) will undoubtedly make some people's blood boil. But in speaking with Sky News, Bayliss likens the practice to the stock market and says he is "very in tune with my moral compass, as a person." In his view, this is all in the spirit of capitalism.

"If you look at the stock market, and the moment you see an arbitrage opportunity, where someone thinks an asset is undervalued, traders are gonna jump on it and arbitrage that profit away. That's exactly what we're doing," Bayliss explains.

"Look at every single step in the supply chain. Someone is adding value somewhere. It's not being sold at cost price. It's capitalism," he adds.
He further justifies the practice of scalping by pointing out that items like a PS5 and Xbox Series X are not necessities, they're luxury purchases. Therefore, if someone can afford to pay MSRP, they might be able to pay above the list price.

Angry At Scalpers? Think Of The Children!

Not everyone can, of course, and to that Bayliss says you should think of the scalpers and their children. Oh, the children! He brings up examples of successful scalpers paying off gambling debts, renovating their homes, quitting their jobs, and spending more time with their kids. For some it's a side hustle, and others jump in full time, he says.
"What they're doing is they're being entrepreneurs, they're going out, creating a side income, and they're doing something that 90 percent of the population can't be bothered to do," Bayliss says. 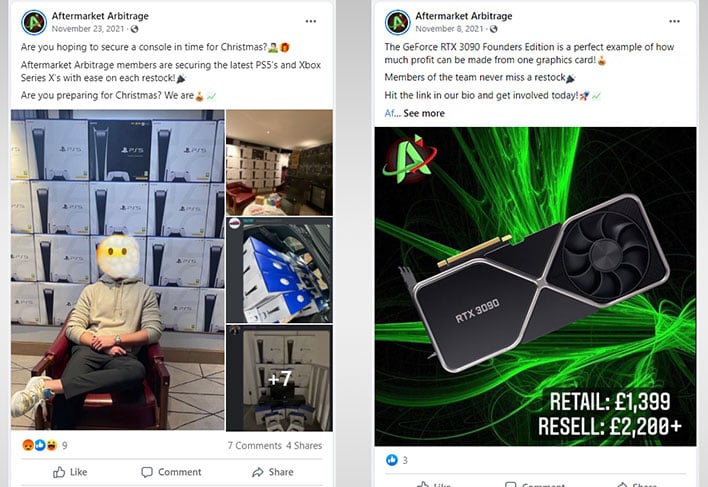 Some people will undoubtedly agree with this rationale, while others will take umbrage with him posting pictures to social media of himself sitting in front stacks of consoles. And what about bots? Probably the most surprising thing is his estimation that 95 percent of his site's 1,500 subscribes eschew the use of bots for manual purchases.
He takes it a step further and says any legislation that might come along to ban bots would only benefit him, essentially because it would mean less competition for him and his subscribers.
Regardless of you how feel about the practice of scalping, it's interesting to get an insider's perspective. Maybe he's being honest about the bots, maybe not. Either way, his comments give you a glimpse into one of the minds of someone who is very much entrenched in the world of buying up hard-to-find items and selling them for big markups.