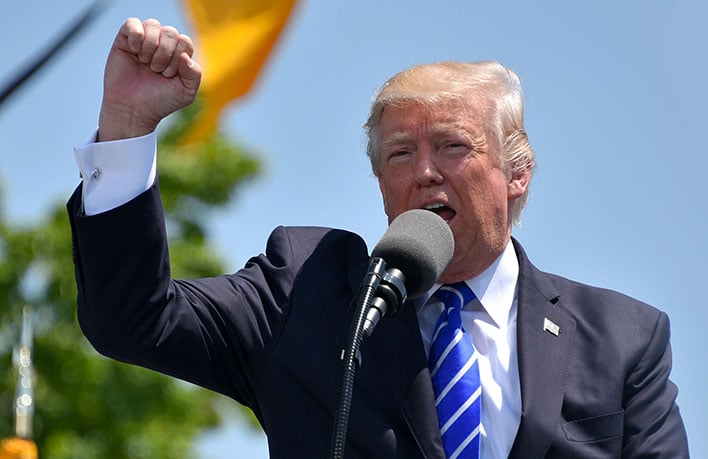 In a recent post to Twitter, President Donald Trump offered up harsh criticism on Apple's policy of refusing to "unlock phones used by killers, drug dealers, and other violent criminals," which boils down to a fundamental argument over privacy and encryption, and the iPhone maker's resistance to building a backdoor into iOS.
Apple's stance drew widespread attention following the shooting by a pair of San Bernardino terrorists a few years ago. Authorities had recovered an iPhone 5C that belonged to one of the shooters, but he perished in the gunfire during a confrontation with police. Initial attempts to bypass the iPhone's security to unlock the handset were unsuccessful, leading to a legal showdown between the FBI and Apple.
At one point, a federal judge ordered Apple to break the encryption on the gunman's iPhone. Apple held firm in an appeal, and eventually the FBI backed down from its lawsuit, which avoided setting a legal precedent. Since then, not much has changed—the FBI still feels Apple should cooperate with thwarting its own encryption, while Apple contends that building a backdoor into iOS would be a monumental privacy risk to its users at large.
Now the President of the United States has weighed in on the matter.

We are helping Apple all of the time on TRADE and so many other issues, and yet they refuse to unlock phones used by killers, drug dealers and other violent criminal elements. They will have to step up to the plate and help our great Country, NOW! MAKE AMERICA GREAT AGAIN.

"We are helping Apple all of the time on TRADE and so many other issues, and yet they refuse to unlock phones used by killers, drug dealers and other violent criminal elements. They will have to step up to the plate and help our great Country, NOW! MAKE AMERICA GREAT AGAIN," President Trump wrote.
The President's tweet is response to Apple doubling down on its stance following the confiscation of locked iPhones used by a shooting suspect at a Navy base in Pensacola, Florida last month. US Attorney General William Barr had previously weighed in, claiming Apple had provided no "substantive assistance" in unlocking the iPhone devices. Apple refuted the claim.

"We reject the characterization that Apple has not provided substantive assistance in the Pensacola investigation. Our responses to their many requests since the attack have been timely, thorough and are ongoing. We responded to each request promptly, often within hours, sharing information with FBI offices in Jacksonville, Pensacola and New York. The queries resulted in many gigabytes of information that we turned over to investigators. In every instance, we responded with all of the information that we had," Apple said in a statement on Monday.

From the outside looking in, this appears to be a power play. The iPhone models recovered are older models that are already susceptible to third-party hacks, and it seems the FBI could crack into them if that was the end goal. However, this might be another attempt to set a legal precedent, so that Apple would be forced to build backdoors into all current and future iPhone models.
It remains to be seen how it will play out, though it's unlikely Apple will acquiesce to the President's tweet.