Are you feeling a little bored in the kitchen? Prepare to be a-Mew-sed. A Pokémon cookbook that features recipes inspired by the Pokémon universe is currently available for preorder.

My Pokémon Cookbook includes over forty-five different recipes. Some of the recipes are based on the different regions in the Pokémon universe, including Galar, while others are inspired by characters like Pikachu and Charizard. For example, the “Gengar” recipe is a yogurt bowl that is the same deep purple color of the character it is named after.

According to the publishers, the cookbook is for “every skill level” and features “step-by-step directions and beautiful photos.” We also noticed that the recipes include a difficulty level. The “Charizard” pasta dish is rated a 1 out of 4 and is therefore considered an easy recipe. Each recipe also states whether or not the dish meets certain dietary restrictions. For instance, both the aforementioned Gengar and Charizard recipes would be suitable for vegetarians. 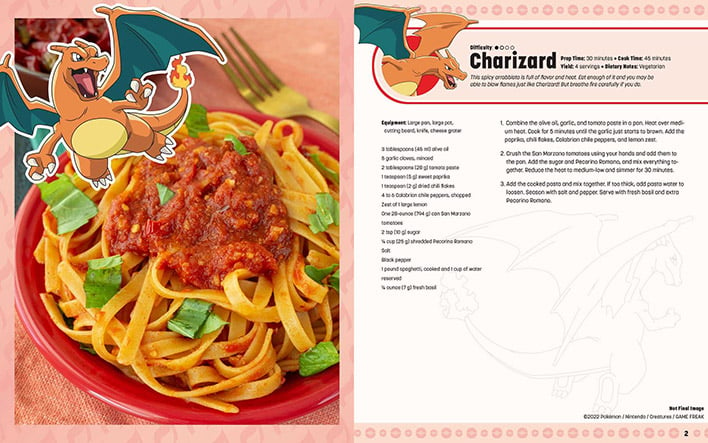 The cookbook is authored by Victoria Rosenthal. Rosenthal is the creator of the Pixelated Provisions blog where she “[combines] her lifelong passions for video games and food by recreating consumables found in many of her favorite games.” She is also the author behind the official Fallout, Destiny, Street Fighter, Halo, and Final Fantasy XIV cookbooks. Her past cookbooks have been very well reviewed and we would imagine that the new Pokémon cookbook would deliver similar content.

This is certainly not the first Pokémon cookbook to hit the market, but it is quite different from its predecessors. Most Pokémon cookbooks tend to feature recipes in which the final dish visually resembles a Pokémon or something from the Pokémon universe. There are a plethora of recipes for transforming pancakes into Pikachu’s face or creating cute, themed cupcakes. As demonstrated by the cover, even Rosenthal could not resist publishing at least one recipe that showcases Pikachu’s iconic face. Nevertheless, this new cookbook is overall more focused on creating dishes that are inspired by the Pokémon universe but ultimately resemble dishes one would normally eat.

My Pokémon Cookbook: Delicious Recipes Inspired by Pikachu and Friends is currently available for preorder on Amazon for $25.19. It will officially be released on October 25, 2022. The book can either be purchased on its own or in a $50 gift set that also includes a Pokémon apron.