It is unclear whether the images of the supposed Pixel Watch are real, but they look similar to other leaked images of the smartwatch. The watch face is bezel-less and features a large button near the crown. One of the most intriguing aspects of the device is the straps. They appear to be a Google-proprietary band made of a silicon-like material. The band is 20mm wide, which is narrower than the Apple Watch band.

Redditor Tagtech4143, the individual who leaked the images of the device, noted that the band was “kind of a pain to attach the first time,” but “extremely secure” once attached. This particular band is black, but there will likely be additional colors. It is also possible that Pixel Watch wearers will need to buy specific bands from Google. 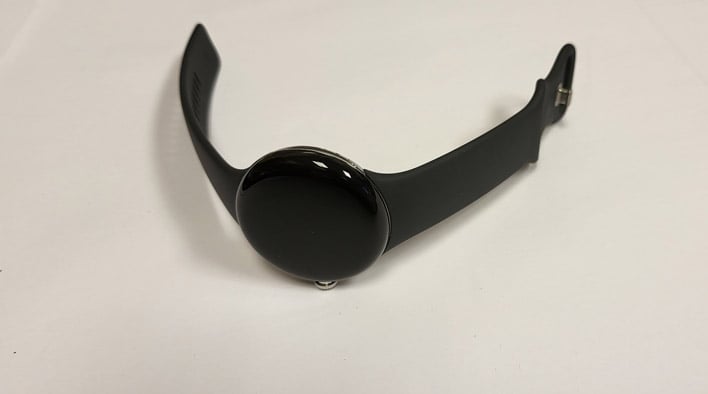 The Pixel Watch is purportedly very comfortable to wear. u/tagtech4143 claims that the smartwatch “feels like it’s not even there.” They also insisted that the crown does not dig into the skin like other smartwatches.

The story behind how u/tagtech4143 acquired the Pixel Watch in the first place is rather odd. The watch was originally left at a restaurant and found by their friend, who is a bartender. The restaurant waited several weeks for someone to claim the watch, but no one ever came. The bartender decided to give the watch to u/tagtech4143 who is interested in tech.

The bands are supposedly unattached in some photos because their “buddy forgot to give them to me with the watch. They were packaged separately and he forgot to bring them over, so he sent me pictures of them for the article.” u/tagtech4143 also noted that there was no charger and only a teeny bit of battery left in the smartwatch when the bartender found it. The bartender was able to turn on the device long enough to capture an image of the Google logo, but the battery has since died.

As noted above, there has been no announcement for the Pixel Watch. Many believe that it will be announced alongside the Google Pixel 7, which will possibly occur this fall. It will therefore probably be some time until we get official pictures of the Pixel Watch.

Images courtesy of u/tagtech4143 via Imgur