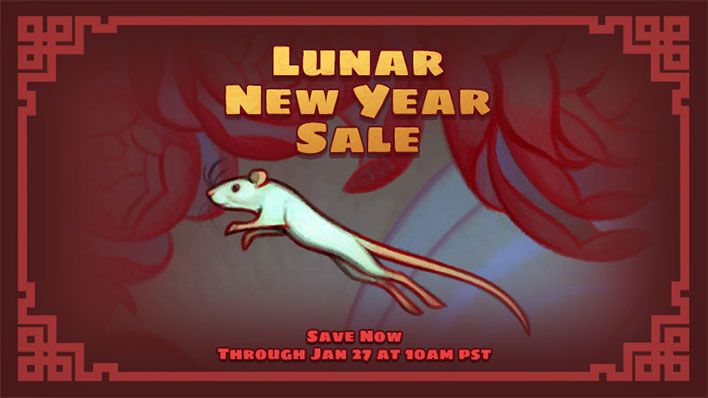 In case you missed it, Steam is currently hosting its Lunar New Year Sale with some nifty discounts on a whole lot of games. The sale is in celebration of the Chinese New Year, this being the year of the rat, and it runs through Monday, January 27, 2020 at 10:00am PST (1:00pm EST). So, you have the entire weekend to stock up on games.
As part of the tie-in with the Lunar New Year, Steam is gifting red envelopes containing tokens. There is a new one available each day, and users can redeem the tokens for various perks, such as animated chat stickers, chat room effects, profile backgrounds, and more. If a user accumulates 5,000 tokens, they can redeem it for a $5 off coupon on their next purchase.
"In celebration of the New Year, follow the origin story of the Zodiac as you open a new gift from the Emperor each day of the sale. Daily red envelopes feature Year of the Rat Tokens, good toward seasonal items available exclusively in The Lunar New Year Night Market. Plus, earn more tokens when you shop in the Lunar New Year sale!," Valve states.
As usual, there are a ton of games marked down, some of which are deeply discounted. Here is just a small sample...
There are a whole lot of other games that are on sale, which you can browse by going here.

If you are not looking to spend anything, that's okay, there is still something that might be of interest during the Lunar New Year Sale (and beyond). From now until Half-Life:Alyx launches, Valve is allowing gamers to play all games in the Half-Life Collection for free.
"Half-Life: Alyx is set before the events of Half-Life 2 and the episodes, but the games share characters and story elements. The Half-Life: Alyx team believes that the best way to enjoy the new game is to play through the old ones, especially Half-Life 2 and the episodes, so we want to make that as easy as possible. From now until Half-Life: Alyx launches, visit the game page of each Half-Life game to install it and play as much as you want, right up until the day Half-Life: Alyx is released!," Valve explains.
Those games include...
You will also find these games included in the bundle...