It is often said that records are meant to be broken, but holy cow, we did not expect retro video game collectors to run with the concept the way they have been over the past several weeks. For the third time in less than a month, a collector has paid a record amount for a video game cartridge, this time plunking down a staggering $2 million for an unopened copy of Super Mario Bros. for the Nintendo Entertainment System.
Super Mario Bros. came out for the NES back in 1985 and was an instant hit. Now almost four decades later, the game still holds up as a fun platform title. It has also spawned multiple re-releases on various hardware, most recently Nintendo's revived Game & Watch handheld. And then of course there is the Super Mario Maker series, which enables players to build their own side-scrolling levels.
Though still popular, fetching $2 million for an original copy is still mind boggling. A large part of what led the cartridge to attract the highest price ever paid for a video game is that it has never been opened. Factory sealed games from 36 years ago are pretty rare. It also sports a 9.8 A+ grade by professional grading service Wata, according to collectibles site Rally, which sold the game to an anonymous buyer. 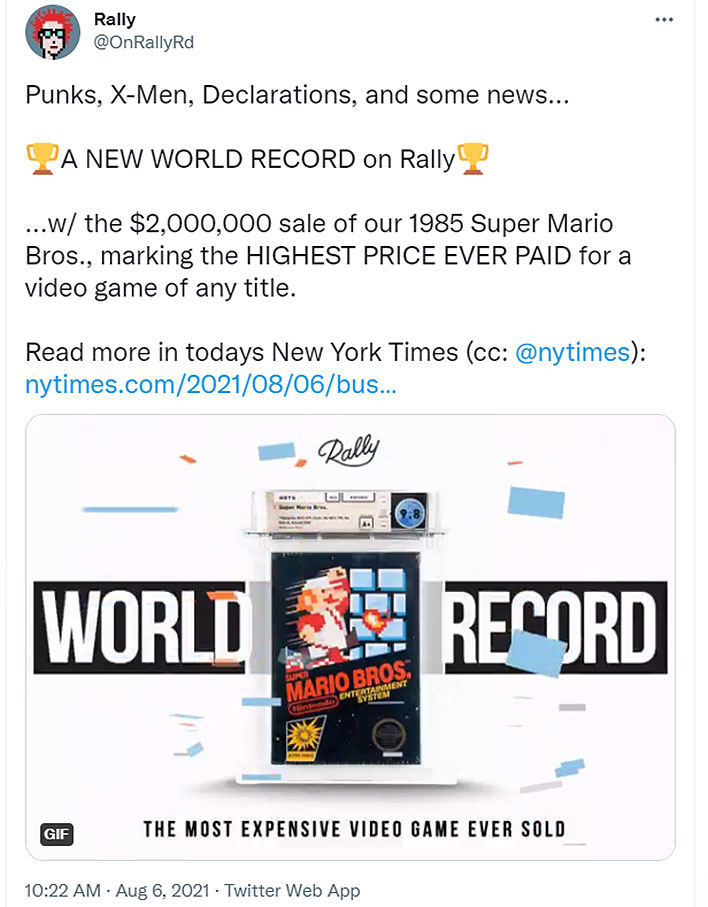 "This makes it the highest-graded example in existence. Lauded as the 'Holy Grail' of vintage video game collectibles, #85MARIO is also one of only 14 cardboard 'Hangtab' box variants, the earliest mass-produced version of the asset," Rally explains.

The $2 million figure eclipses the previous record for a video game sale—$1.56 million for a sealed copy of Super Mario 64. And before that, a factory-sealed copy of The Legend of Zelda for the NES sold for $870,000 in the same month, which also set a record at the time.
Super Mario Bros. seems destined to retain the top spot. Before records were set by The Legend of Zelda and then Super Mario 64, it was another Super Mario Bros. cartridge that held the distinction, having sold at auction for $660,000 earlier this year.
Unlike all those other sales, however, Rally does not offer up its assets in an auction style format. Instead, it acquires various collectibles and then allows people to buy shares in them. Then when someone offers to buy the collectible, investors vote on whether to sell at the price being offered.
In this case, Rally paid $140,000 for the Super Mario Bros. cartridge in April of last year. Rally told The New York Times that investors rejected a $300,000 offer for the game last year, and that turned out to be a savvy decision. Interest in collectibles has surged during the pandemic, and by waiting another year, that $140,000 investment turned into a record breaking $2 million sale.
As for what that boils down to for investors, it depends on much they put into the asset. A person who invested $100 in the game last year says they cashed out $950 after the $2 million sale. Not bad at all.