It didn't take long for Valve to earmark its initial batch of Steam Deck handheld gaming PCs to those who plunked down $5 for a reservation, which will begin shipping in December. Any new reservations placed are now estimated to ship sometime after the second quarter of next year. There's a window of opportunity for competitors to fill the gap, and One-Netbook is hoping to do exactly that with its own line of handheld PCs. Additionally, it's seeking testers for its newest model, the One XPlayer AMD Edition.
Handheld game consoles are immensely popular. Nintendo dominates the field with its lineup of Switch consoles, but handheld gaming PCs are gaining momentum. One-Netbook is one of the players in the space, having previously generated over $2 million in crowdfunding on Indiegogo for its One XPlayer, which shipped in May of this year.
It actually reached its funding goal in just 15 minutes, to put into perspective the kind of demand that exists for this sort of thing. The One XPlayer initially debuted with an Intel Core i5-1185G7 processor (Tiger Lake), then later came a version with a faster Core i7-1195G7. Now the company is getting ready to release another model, with AMD hardware inside.
One-Netbook has not provided specifics about the CPU and GPU, so there's no way of knowing how the foundation will compare to the Steam Deck with its custom 4-core/8-thread Zen 2 CPU and RDNA 2 graphics. However, the One XPlayer AMD Edition will most likely have a higher resolution. The models that have already released sport an 8.4-inch IPS display with a 2560x1600 resolution (358 PPI), along with 16GB of LPDDR4X-4266 memory and support for up to 2TB of storage. 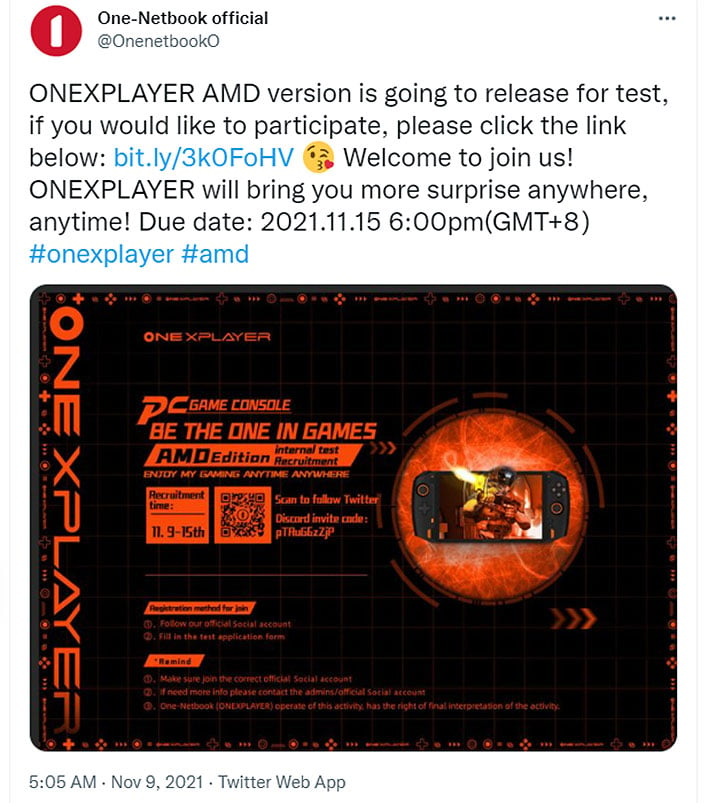 On Twitter, One-Netbook announced that it is planning to release One XPlayer AMD Edition models for testing on November 15, 2021. It's currently accepting applications for gamers who are interested in participating, which amounts to a short form with a handful of questions (name, age, reason for applying to test the AMD version, and so forth).
It's not clear how many people will be selected, but if you're interested, fill out One-Netbook's application and cross your fingers you get chosen. Good luck!