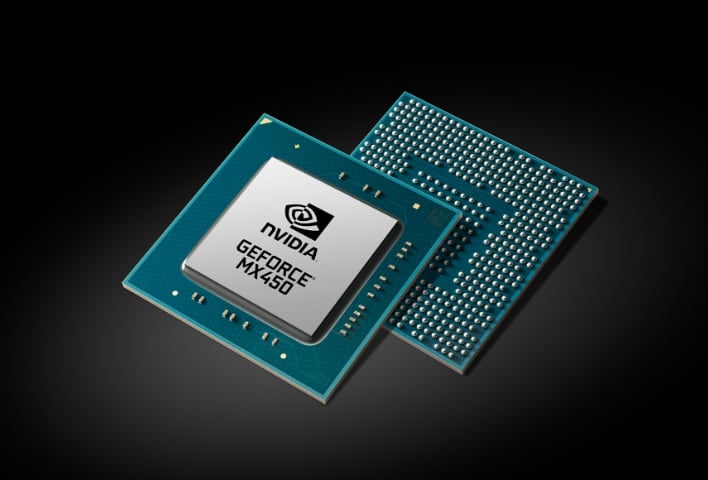 Here’s a rather peculiar reveal for a Tuesday afternoon. NVIDIA Germany out of nowhere -- with no fanfare — revealed a product page for the GeForce MX450 GPU, which is an entry-level graphics solution for laptops.

The GeForce MX450 is obviously being positioned as a performance upgrade over the existing GeForce MX300 series of GPUs, but NVIDIA isn’t quite ready to delve into actual figures or architectural specifics at this time. What the company is revealing, however, is that the GeForce MX450 will provide a notable upgrade in performance over integrated solutions from Intel and AMD (think AMD Ryzen 4000 and 10th generation Intel Core processors). NVIDIA does point out, however, that those seeking more performance should look to its mobile GeForce GTX (and GeForce RTX) graphics solutions.

Although NVIDIA is rightfully calling out garden variety IGPs included with today’s mobile processors for their meager performance, it will be interesting to see how much of a performance jump the GeForce MX450 offers against Intel’s much ballyhooed 12th generation Xe graphics that will be incorporated into its 11th generation Tiger Lake processors.

One interesting spec that NVIDIA did reveal, however, is that the GeForce MX450 will support the PCIe 4.0 interface. This would make it the first consumer-oriented GPU from NVIDIA to support the interface, as well as the first mobile GPU from any manufacturer to support PCIe 4.0. What’s interesting here though is that PCIe 4.0 isn’t a prerequisite for a low-end offering like the GeForce MX450; PCIe 3.0 would do just fine.

What NVIDIA could potentially mean here is that the GeForce MX450 will be compliant with PCIe 4.0-capable processors, which Tiger Lake will be. AMD famously decided to forgo PCIe 4.0 on its Ryzen 4000 mobile processors for power consumption reasons, despite the fact that its desktop-based Zen 2 processors support the interface. With that being said, we’re certain that the PCIe 4.0 will be fully utilized by the upcoming GeForce RTX 30 Series Ampere graphics cards.

NVIDIA also revealed that the GeForce MX450 supports both GDDR5 and GDDR6 memory. And if NVIDIA’s history is any indication, it’s likely that GeForce MX450 will be based on a seriously cutdown version of its current-generation Turing architecture, whereas GeForce MX350 is based on Pascal.

At this point, NVIDIA has not given a launch date or even launch “window” for its GeForce MX450, but we’ll keep our eyes peeled once the first salvo of Tiger Lake-based laptops are announced next month.