We're just a week away from the official launch of NVIDIA's GeForce RTX 3070 graphics cards, which is its new mainstream GPU that promises previous generation "flagship" GeForce RTX 2080 Ti performance at the $499 price point. Given how close we are to retail availability, it was inevitable that performance benchmarks would start leaking out, and we have two results to share with you this morning. 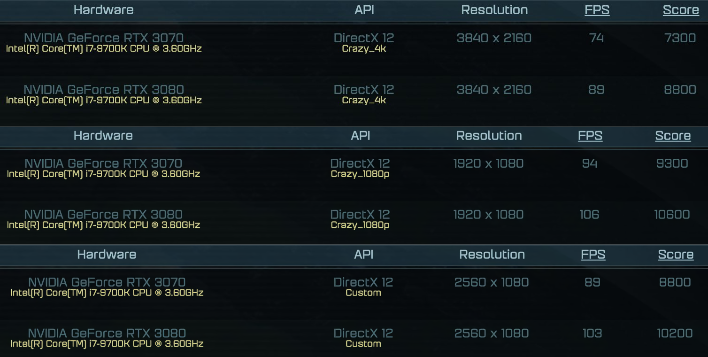 According to _rogame, who is a reliable source for leaked benchmarks for both CPUs and GPUs, says these results all were performed by the same person using the exact same Core i7-9700K system.

If that wasn't enough, the folks at VideoCardz claim to have gotten their hands on benchmarks for the GeForce RTX 3070 running the 3DMark benchmark suite. Here are the (Graphics) figures that were allegedly obtained:

As we have previously reported, the GeForce RTX 3070 is built using NVIDIA's GA104-300 GPU (17.4 billion transistors) and features a total of 5,888 CUDA cores. Reference cards will have a base clock of 1,500MHz and a boost clock of 1,725MHz while delivering 20.3 TFLOPs performance while adhering to a 220W TDP. We expect those clock speeds to vary slightly for third-party cards.

The GeForce RTX 3070 was originally supposed to launch on October 15th, but NVIDIA decided to delay the launch until October 29th so that it would have enough supply to meet what is expected to be tremendous demand.