There are certain things you can count on in this world. Like death, taxes, and Tom Brady winning a Super Bowl. It is a short list of certainties, but one more to toss on the pile is more affordable graphics cards based on the latest generation GPU architectures (Ampere and RDNA 2) being in the works. One of those cards is a regular version of the GeForce RTX 3060 (read: non-Ti), announced at CES 2021, and the part is scheduled to launch later this month.
Interestingly enough, NVIDIA released the GeForce RTX 3060 Ti before the non-TI variant this round, whereas in the past the more powerful Ti models came out later. NVIDIA is also known for being a bit unpredictable, though, and each generation is its own living entity, so it is not ultra surprising that NVIDIA tweaked the formula this round.
Regardless, a non-Ti model is bound for retail shelves very soon. As to exactly when, according to the folks at WCCFTech, we can expect the GeForce RTX 3060 to launch in about two and a half weeks, on Thursday, February 25, at precisely 6:00 am Pacific (9:00 pm Eastern). It is not clear if the site managed to sneak a peek at an internal slide or presentation, but it is super confident in the information.

NVIDIA has already confirmed the GeForce RTX 3060 will start at $329. Here will be NVIDIA's Ampere lineup when the new part arrives...
Those are MSRPs, and not street pricing—lack of availability (for a variety of reasons) has led to inflated prices by marketplace sellers, and in some cases, even by first-party sellers (partly due to tariffs). Pricing will naturally vary, based on actual availability and different design schemes (custom coolers, factory overclocks, and so forth).
The GeForce RTX 3060 will arrive with 12GB of GDDR6 memory, which is another surprise from NVIDIA. That's because  the GeForce RTX 3060 Ti actually sports less memory at 8GB. It is another example of NVIDiA being unpredictable. That said, it will have a narrower memory bus, at 192-bit instead of 256-bit.
NVIDIA is claiming its upcoming card will deliver 13 shader TFLOPs and 12 RT-FLOPs of performance, compared to 16.2 TFLOPs and 31.6 RT-FLOPs, respectively, for the Ti model.
The card is being pitched as an ideal upgrade for gamers who have clung to their GeForce GTX 1060 from a couple generations ago. According to NVIDIA, the GeForce RTX 3060 doubles the rasterization performance compared to that card, while delivering a 10X jump in ray-tracing performance (not surprising, since only RTX models have dedicated RT cores). 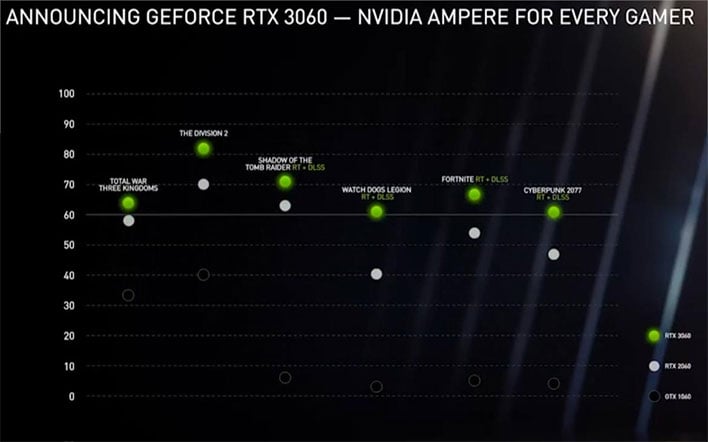 What that all translates to, according to NVIDIA, is a smooth 60 frames per second or higher in games like The Division 2, Cyberpunk 2077, and Watch Dogs Legion, with ray tracing turned on and DLSS enabled. The previous generation GeForce RTX 2060 can also deliver 60 fps at the same settings in some games, but not all of them, as NVIDIA outlines in its performance chart above.
The GeForce RTX 3060 is shaping up to be a popular card, depending on availability and actual pricing. It's worth noting that the GeForce GTX 1060 is still the most widely used graphics card on Steam, with a 9.75 percent share. That part launched at $249.