Gamers that own an Mac can now answer "Yes!" when asked "But can it run Crysis?", thanks to NVIDIA GeForce NOW. The cloud game streaming service has dropped an update that will deliver the ultimate upgrade to Mac owners.

With the company's latest update Mac owners can not only run Crysis through GeForce NOW, but if they purchase a six-month Priority membership, or the newest tier GeForce NOW RTX 3080 membership, they will also receive a free redeemable code for Crysis Remastered on the Epic Games Store.

GeForce NOW is a subscription-based cloud streaming service that allows people to play PC games they already own -- along with an array of free titles -- on many different devices, including devices that typically cannot run those games. The company offers three different tiers to choose from. They range from a free tier that gives you standard access to its servers for 1-hour sessions, a Priority tier for $49.99 for six months that delivers RTX capabilities with priority access to its servers for six-hour sessions, and finally the RTX 3080 tier that will give users exclusive access to RTX 3080-class game servers and eight hour session times for $99.99 for six months. Priority access delivers 1080p at 60 FPS, while the 3080-class servers will deliver up to 1440p at 120 FPS on both a PC and a Mac. For users of Shield TV, the 3080 servers can deliver up to 4K. 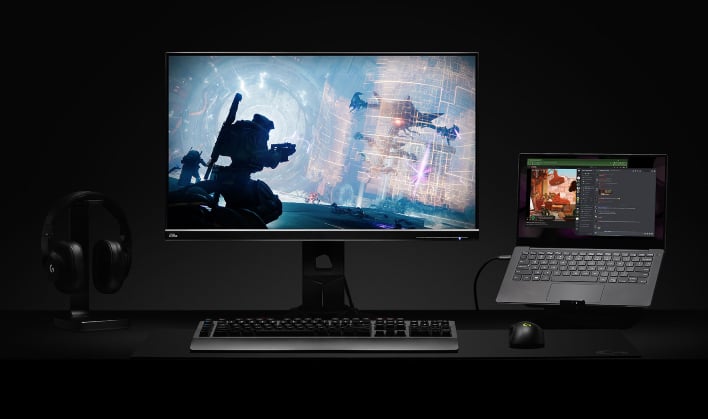 The most recent GeForce NOW update, Version 2.0.36, includes a new feature that will link your GeForce NOW account with your Ubisoft account to enable faster Ubisoft Connect game launches. In the past users would have to go through the sign-in process to stream their Ubisoft games. But the update that Mac owners will be most interested in is a fix for streaming at the correct aspect ratio on the Apple MacBook Pro M1 Max. An update to the countdown timer when viewed in the in-game overlay was also included.

Mac owners who are also gamers were always faced with the challenge of how to play the games they loved without having to buy a PC or gaming console. With NVIDIA GeForce NOW, they can push those consoles and PC's to the side and stream their favorite games right from their Mac (as long as the game is supported by GeForce Now). In fact, GeForce NOW can give them the same gaming performance across all their Apple devices such as a MacBook Pro, MacBook Air, iMac and iOS devices. This allows them the ability to stay in the Apple ecosystem they have come to love (or just be stuck in).

NVIDIA GeForce NOW also saves all the game data to the cloud, so when you want to switch from playing Crysis Remastered on the iMac to playing on an iPhone it is seamless. You simply login to the service on your iPhone and pick-up where you left off on the iMac. This can also be done with any device supported by the NVIDIA service.

If you do purchase the six-month membership RTX 3080 tier and own an M1 MacBook Air or MacBook Pro, you can play at the native resolution of 1600p for up to eight hours. And whether or not you go for the RTX 3080 tier or the Priority tier, you will be able to use RTX ON to experience games like Cyberpunk 2077 and Control with real-time ray tracing without having to buy or upgrade a PC.

The update also includes six new titles supported by GeForce NOW. You can see the list of the titles and the dates they will be added to the servers below. NVIDIA had hoped to add Syberia: The World Before in December, but the game changed its release date to next year.

Apple gamers now have an option that delivers high-end gaming to the Apple ecosystem. NVIDIA GeForce NOW is a solid option for anyone who does not have a PC that can handle many of the games they want to play, or simply want to be able to take their games with them to play on mobile devices.