NVIDIA And CDPR Are Giving Away Cyberpunk 2077 Themed GeForce RTX 4090 GPUs, How To Enter

If you would like to win a very cool RTX 4090 GPU, NVIDIA and CD Projekt Red are giving you the chance. The two companies are teaming up to give away a total of three RTX 4090 GPUs, along with a Cyberpunk 2077 custom backplate.

NVIDIA recently announced the upcoming launch of their high-end 40 Series GPUs. People immediately began to murmur about the pricing of the GPUs, with the RTX 4090 having a price tag of $1600. But don't fret too much, NVIDIA has teamed up with the Cyberpunk 2077 developer to give three people the chance to snag one of these beasts, along with an extremely cool backplate.

If you are wanting to take part in the contest, called the "Cyberpunk 2077 x NVIDIA Treasure Hunt," you will first need to be at least 18 years old on the day of entering. While the contest is worldwide, the contest rules state that deliveries in certain countries (including the territory of the Russian Federation, Ukraine, Belarus and Brazil) may be significantly hampered for reasons outside the control of the organizer. 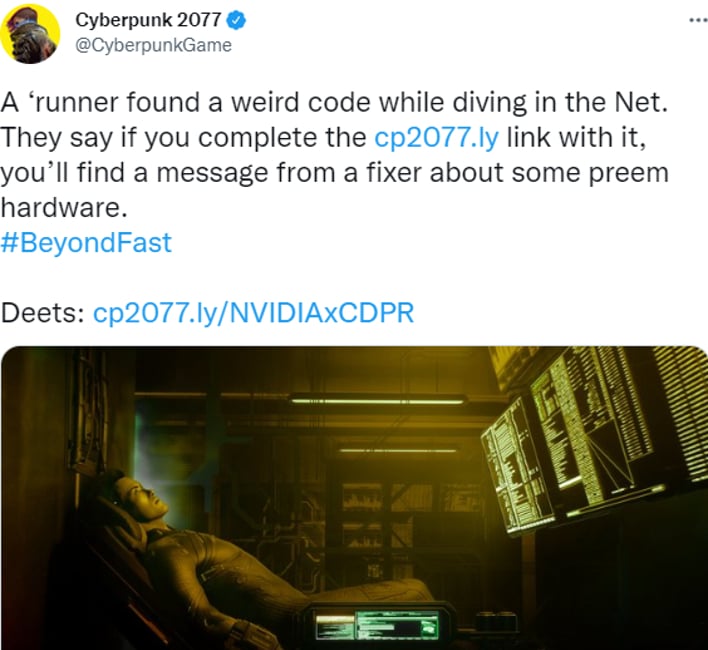 In order to participate in the contest, you will first need to submit a screenshot taken in Cyberpunk 2077 photo mode, and saved in a .png or .jpg format and cannot be modified. Entries are to be submitted as a reply to the tweet with an answer to the task posted on @cyberpunkgame.

Winners of the contest will be selected by a jury consisting of Community Managers of the Organizer ("Contest Committee"). Entries will be judged based on creativity, originality and compliance with the task. All decisions will be final and will be announced on both the Official Cyberpunk 2077 and Official NVIDIA GeForce Twitter accounts.

So, jump into some Cyberpunk 2077 and start grabbing some creative and original shots during your gameplay. You never know if one of them could score you a next generation RTX 4090 GPU, and don't forget to post your shots on Twitter according to the rules.