NVIDIA is much more than a consumer graphics card and GPU company, it is heavily involved with artificial intelligence and autonomous vehicle technology as well. It's those latter markets that are the focus of its GTC 2021 conference, as it looks to advanced its technology portfolio in both categories. NVIDIA today introduced its Jetson AGX Orin, DRIVE Concierge and DRIVE Chauffer technologies built on Omniverse Avatar.
There are a lot of buzzwords at play, but beneath it all sits some really cool technology. Starting with Jetson AGX Orin, NVIDIA is pitching this as the world's smallest, most powerful, and energy-efficient supercompuer for robotics, autonomous machines, medical devices, and other forms of embedded computing that exist on the edge.
NVIDIA's Ampere GPU architecture underpins Jetson AGX Orin, providing it with 6X the processor power as its predecessor, Jetson AGX Xavier. And it injects all that added horsepower without changing the form factor, and while maintaining pin compatibility.
NVIDIA Ampere GPU cores provide 200 TOPs of INT8 precision AI compute throughput. This is combined with a dozen Arm Cortex-A78AE CPU cores and 32GB of LPPDR5 memory, to deliver 200 trillion operations per second and 204GB/s of memory bandwidth. And all that power comes from a package that can fit in the palm of your hand.
"As robotics and embedded computing transform manufacturing, healthcare, retail, transportation, smart cities and other essential sectors of the economy, the demand for processing continues to surge," said Deepu Talla, vice president and general manager of embedded and edge computing at NVIDIA. "Jetson AGX Orin addresses this need, enabling the 850,000 Jetson developers and over 6,000 companies building commercial products on it to create and deploy autonomous machines and edge AI applications that once seemed impossible"

The upshot here is a powerful upgrade for next-generation robotic systems, with a wide range of applications. Think things like robotic surgery, endoscopy, diagnostic imaging, physics processing, and real-time AI decision support for doctors, to name a few. 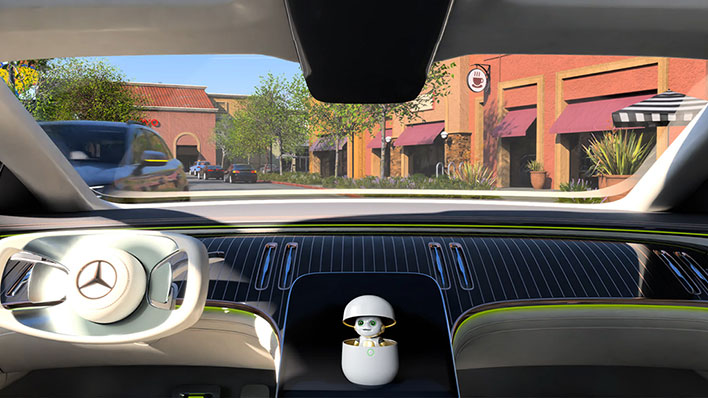 Remember the one thing you worried about when taking your driving exam however many years ago that was? Parallel parking! There's a technique and it takes some practice to master, and like most things, automated technology is better at it than we are. Same goes for other forms of parking (perpendicular, angular), and that's where having an experience co-pilot can come in handy. But what if that co-pilot was digital? And also an assistant that can book reservations, among other tricks? Meet DRIVE Chauffeur (AI for autonomous driving) and DRIVE Concierge (an AI assistant).

DRIVE Concierge and DRIVE Chauffeur are fairly robust assistants, with the highlights being the automation of driving from point A to point B, and then parking in tricky situations. The latter is built atop DRIVE Hyperion 8, which includes the DRIVE Orion SoC with a complete sensor architecture, including high-fidelity surround cameras, radars, ultrasonics, and front LIDAR for a 360-degree surround scene interpretation. NVIDIA says it can handle both highway and urban traffic.


"Using the high-performance compute architecture and sensor set of DRIVE Hyperion 8, DRIVE Chauffeur can drive from address to address. For those who want to drive, the system provides active safety features, intervening in dangerous scenarios. The entire DRIVE Chauffeur pipeline has been architected to perceive the world in 4D for robust and efficient autonomous operation," NVIDIA says.

The DRIVE Concierge AI platform, on the other hand, presents itself to consumers as a digital assistant on the center of the dashboard screen and can help the driver select the best driving mode in an electric vehicle to reach their destination. It's also an on-demand valet that taps into an array of sensors and technologies to intelligently park your car.
"Dense fusion generates information about whether the space surrounding the vehicle is free and the likelihood of whether any space is likely to be occupied by a dynamic obstacle or a stationary obstacle. Then the ParkNet DNN fuses images from multiple cameras and provides a list of potential parking spaces to choose from. Finally, parking spot perception fuses data from multiple cameras to associate parking spaces and parking signs to determine which parking space to use," NVIDIA adds.
There are also other elements that factor into the equation, like dense perception and sparse perception to perceive far-range objects using cameras and radar data. It all comes together to plot a vehicle's path and maneuvering into a parking space without bumping into anyone or dinging up your (or someone else's) ride.
DRIVE Concierge is also part of a bigger play in NVIDIA's Ominiverse. Combined with Omniverse Avatar, it serves as "everyone's digital assistant," and has the ability to make recommendations, book reservations, make phone calls, and provide alerts, NVIDIA says. The idea is to personalize DRIVE Concierge to every person in a vehicle, so it's like they have their own personal concierge and valet at their disposal—no tip required.
NVIDIA's ambitious goal is for DRIVE Concierge and DRIVE Chauffeur revolutionize the driving experience, in part by working in conjunction to make the commute a safer and less stressful one. DRIVE Chauffeur is closer to market with car design wins in 2024, but both have immense potential.

It's impressive stuff, and like Jetson AGX Orion, it's all aimed at making automated and AI tasks better at what they do, so we can be better at we do, whether that's performing delicate surgery or driving to the grocery store (and many things in between).