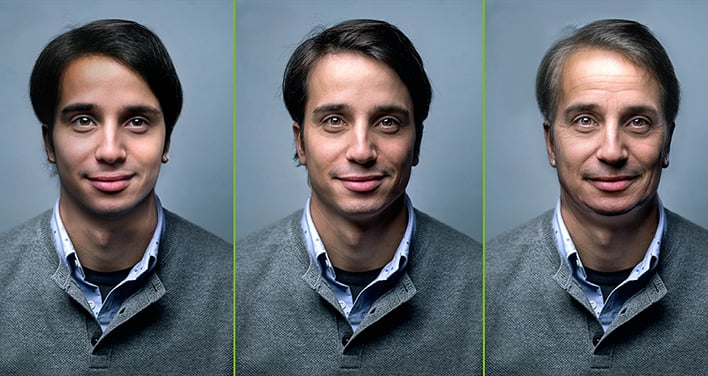 Anyone who has ever tried to touch up a professional photograph knows that it can be a slow, painstaking process, depending on the image and what exactly needs manipulated. To help with that, NVIDIA is introducing GPU-accelerated neural filters to Adobe Photoshop, which leverage artificial intelligence and its GeForce RTX GPUs to potentially speed up these kinds of edits in a big way.
Or you could just play around with all this fancy technology to see what you might look like in 30 years. You can see this in the collage above. The subject in the center is the original photo, flanked on other side by a younger version of himself and an older depiction, both obtained by adjusting a simple slider or two. Pretty neat stuff.
There is also so much more that can be done, as outlined in a video highlighting the neural filters...


"Neural filters are a new feature set for artists to try AI-powered tools that enable them to explore creative ideas and make amazing, complex adjustments to images in just seconds. Done manually, these adjustments would take artists hours of tedious work. AI allows artists to make these changes almost instantaneously," NVIDIA explains.
Playing with a subject's age (your own or someone else) might be fun and interesting, but that alone undersells the capabilities here. These new tools also allow you to adjust the direction a person is facing, adjust their gaze, play around with lighting angles, and more through a bunch of sliders. It's as easy as turning up the volume on your PC, or at least that is how it is demonstrated.
Those are all part of a Smart Portrait filter. The magic happens by tapping into a deep neural network developed by NVIDIA Researcher, which has been trained on a bunch of portrait images. That also means it should improve over time, through additional training.
I will admit, the potential is pretty incredible, as shown in the video above. I'd challenge that the end result is truly discernible from an image that has not been manipulated, but it certainly looks good overall. Of course, the downside is that this could lead to more realistic deepfakes. It is just the way it is—create something great and someone, somewhere, will find a way to abuse it.

NVIDIA also announced that for the first time, Adobe Premiere Elements is gaining GPU acceleration to enable instant playback of various video effects, like adding a lens flare or an animated overlay, cropping videos, and other adjustments.
According to NVIDIA, GPU acceleration enables exports up to 5x faster with hardware encoding, compared to using the CPU alone.
"NVIDIA GPUs accelerate your work with incredible boosts in performance. Less time staring at pinwheels of death means bigger workloads, more features, and creating your work faster than ever," NVIDIA says.
All of this is enabled through NVIDIA's latest Studio driver (v456.71), available now.