For the third time in a row, NVIDIA ran a clean sweep of MLPerf's set of AI and machine learning performance benchmarking suite. This time, however, the distinction of fastest GPU went to NVIDIA's A100 Tensor Core graphics solution, which is based on the company's 7-nanometer Ampere architecture that was recently introduced.
"The A100 Tensor Core GPU demonstrated the fastest performance per accelerator on all eight MLPerf benchmarks. For overall fastest time to solution at scale, the DGX SuperPOD system, a massive cluster of DGX A100 systems connected with HDR InfiniBand, also set eight new performance milestones," NVIDIA stated in a celebratory blog post.
MLPerf is an industry benchmarking group that was formed in 2018. The consortium is comprised of over 70 companies and researchers from leading universities, with its benchmark suites being considered industry standards for machine learning performance. So in that regard, NVIDIA certainly has reason to celebrate yet another sweep of the competition.
That said, it is not a crowded field that NVIDIA stepped into the ring with, as it applies to these benchmarks. From what we can tell, only Google and Huawei challenged NVIDIA for the MLPerf throne. Both came up short, though, with NVIDIA winning all 16 benchmarks (albeit against itself in the majority of the tests that were run).
Here is a look at some of the individual results... 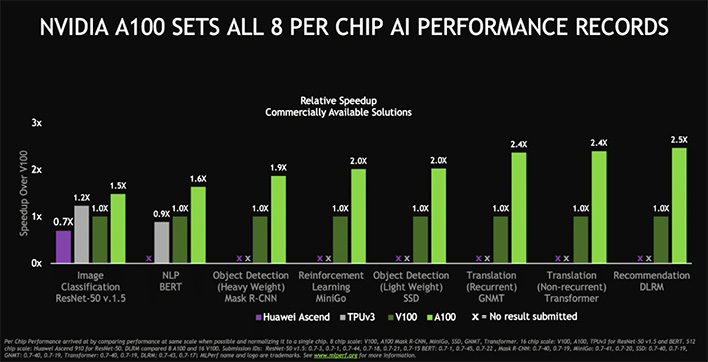 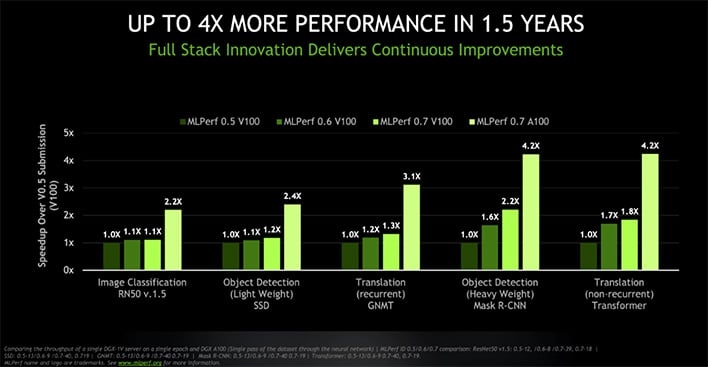 While the field was limited, where others did compete, NVIDIA came out well ahead, beating Huawei and Google by large margins. Likewise, NVIDIA's A100 GPU demonstrated strong performance gains over the last generation V100 (based on Volta), with up to four times better performance achieved in the past 1.5 years (for those keeping count, which NVIDIA is).
Outside of setting performance records in a bunch of tests, NVIDIA points out that the first chip based on Ampere hit the market faster than any of its previous GPUs. It powered the company's DGX systems at launch, and became publicly available in Google's cloud service six weeks later.
"The latest results demonstrate NVIDIA’s focus on continuously evolving an AI platform that spans processors, networking, software and systems," NVIDIA added.
Looking ahead, the next stop for Ampere is the consumer sector. Nothing has been announced, though there has been a bevy of leaks pointing to NVIDIA's next-generation graphics cards for gaming, with big gains in performance expected.