As the demand for internet-connected devices and services grows, so does the need for improved broadband internet globally. Soon, the minimum speeds that the FCC lists will not cut it for the modern connected family where everyone has a phone, computer, or both at-hand. To help navigate the future needs of broadband, Nokia and Vodafone trialed a new fiber optic technology that would allow speeds up to 100 Gb/s on a single wavelength.

The new technology called a Passive Optical Network (PON) works by combining 25G optics with "state-of-the-art digital signal processing (DSP) techniques." Once the state-of-the-art DSP techniques are adopted, moving to 50G and 100G networks should be "straightforward and could be commercially available in the second half of the decade," as Nokia reports. 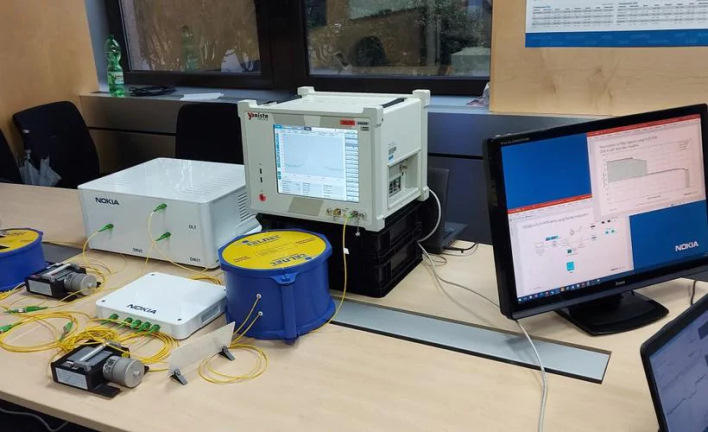 Besides having increased speeds, the PON network has other benefits as well, such as the use of flexible rate transmission. The flexible rate transmission works by grouping fiber modems with similar characteristics to make data transmission more efficient, resulting in lower latency and half the power consumption. Overall, though, as Stefaan Vanhastel, CTO of Fixed Networks Division at Nokia, said, "These breakthroughs in speed turn an existing fiber-to-the-home network into a fiber network that can connect homes, businesses, remote cable nodes and 5G small cells."

Ultimately, if this technology makes it to market in this decade, it could become a game-changer for both existing networks and make for more efficient network deployment in undeveloped areas. Places without fiber lines, such as small towns in the countryside, would require fewer cables if the bandwidth is enough to support the area overall. We could also see the expansion of 5G technology with higher speed fiber optics, which would be great for everyone. Hopefully, we will get to see more advancements in the broadband market soon, but in the meantime, let us know what you think of this technology in the comments below.