No, You Won't Kill Your PlayStation 5 Game Console By Standing It Up Vertically

Speaking from experience, it's not a great feeling to flip on a game console and see visual glitches on the screen caused by faulty hardware, or have it not even power up at all. So when I saw a report earlier this week that standing up a PlayStation 5 vertically was a "guaranteed recipe for disaster," I breathed a sigh of relief that mine had been sitting horizontally since I bought it last year. As it turns out, there would have been nothing to worry about had I oriented it vertically.
So why all the recent fuss? Simply put, a misinterpretation of a popular YouTube channel let to faulty information permeating the news circuit, with headlines warning that standing the PS5 upright "could cause permanent damage" and "might lead to catastrophic failure."
The original warning came from Wololo.net, which stated in no uncertain terms, "You're killing your PS5 by using it vertically, due to a design flaw by Sony, according to hardware experts." That headline was a faulty summation of a YouTube video by TheCod3r. The video in question talked about the risk of liquid metal on the APU oozing out and spilling onto the motherboard. 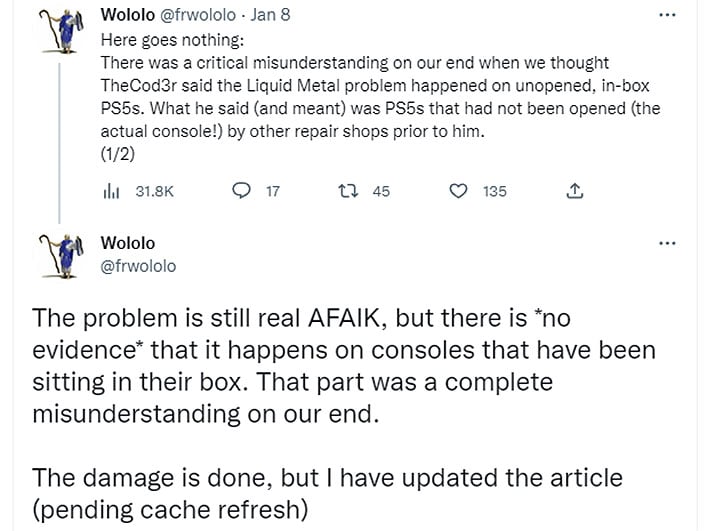 There actually are reports of this happening, though not from any specific orientation of the PS5. It's also very rare. Where things kind of blew up, however, is when Wololo misinterpreted a statement TheCod3r made about a console that had never been opened, which the site incorrectly took to mean the PS5 was brand new, sitting on a shelf, and still leaked liquid metal.
"This was a misquote: what he said was that the console itself had never been opened by a repair shop prior to him. Not that the console had been sitting in its box for months in a vertical position," the site later clarified.
While the issue at hand could potentially affect PS5 consoles that have been opened up for whatever reason, it appears to be a rare one, and not related to whether you stand it up vertically or lay it flat. If you own a PS5 console, rest easy knowing that either orientation is fine, just as Sony designed it to be. That is good news, since PS5 consoles are still hard to come by.

That said, I'd caution against restricting airflow. Circling back to my previous statement, I once killed an Xbox One console by placing it in a home theater cabinet with not enough ventilation. Hey, even experienced users sometimes make rookie mistakes!
Update 1/13/2023 12:59pm ET
After discussing the situation internally, we made the collective decision that a clarification was in order, especially with our headline angle. Specifically, we wanted to note that TheCod3r remains firm in his criticism of Sony's design as it applies to using liquid metal. There are safeguards to prevent the thermal material from spilling out—tape and foam—but TheCod3r doesn't believe they're adequate.

His clarification was strictly related to Wololo misquoting him as saying he's seen the issue on a never-before-unboxed PS5. That isn't what he actually said. You can hear his full clarification in a follow-up video he posted, in which he also doubles down on this being a design flaw (one of many, in his opinion), albeit he concedes most people probably won't experience an issue. He further states it's certainly not on the level of the infamous red ring of death that plagued Xbox 360 consoles from a previous era of gaming.
So what's our take? We don't believe TheCod3r is making up stories about seeing this issue manifest on occasion (he's a repair technician), nor do we think he has any ill-will towards Sony for whatever reason. At the same time, it's definitely worth pointing out that Sony has sold over 30 million PS5's over the past two years, and if this was a major defect, we'd see a lot more reports and complaints. Even of the PCBs that exhibited this issue when sent in to TheCod3r, it's impossible to know if it occurred through normal use and gravity, or if something else contributed (like bumps during shipping, the console being opened and mucked with, and so forth).
If you want the added peace of mind, by all means, lay your PS5 horizontally. But given how isolated these cases appear to be, we wouldn't fret about standing it up vertically, either.