What a time to be alive for car enthusiasts. Last year, Toyota rekindled one of its most storied nameplates with the launch of the 2020 Supra, and now it looks as though Nissan is finally ready to give its 370Z a much-needed makeover. For those that don't follow the automotive industry, the 370Z was first launched way back in early 2009, and hasn't see any significant updates since then -- in other words, it's old as dirt.

However, Nissan has just teased its next-generation sport car, which is rumored to be called the 400Z, and we're loving what we see so far. Nissan held a livestream this week in which it talked about its business operations, which is typically pretty dry and boring stuff. But as the presentation ended, the company rolled out a video clip showing the company's family of vehicles and leading the charge is none other than the 400Z.

The long hood/bonnet, and slinky hips of the 370Z (and of course, the classic Datsun 240Z) are transferred over to the 400Z, and we still get that long sloping roof that angles down to its ample posterior. Although the video is grainy and dim -- on purpose -- we can see some details like daytime running light (DRL) signature flanking the headlines, a chrome strip starting at the top of the a-pillar and running along the roofline, and a "Z" badge below the rear quarter window.

Overall, this looks like a rather tidy package, perhaps even shorter than the outgoing 370Z. Although we can't see all of the details at this point, the overall execution seems like it will less controversial than the sometimes overwrought appearance of the new Supra. 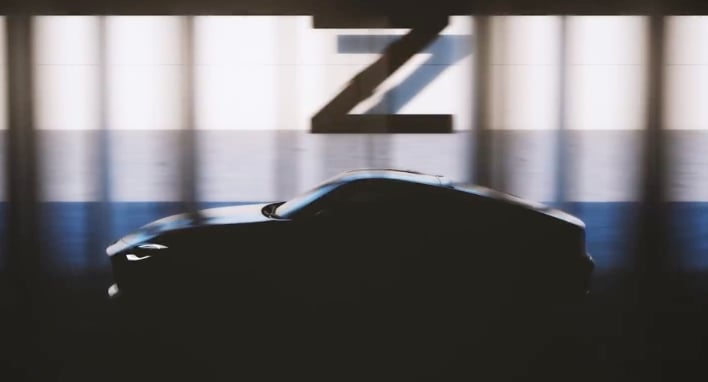 As for the powertrain, we're expecting the 400Z to retain its RWD layout, using an updated version of the platform currently underpinning the 370Z and the Infinity Q50. It's reported that there will be two engine options available: a 2.0-liter turbocharged four-cylinder engine pushing close to 250 horsepower and a V6. With regards to the V6, Nissan has a couple of options. It could use an enlarged version of the current naturally-aspirated 3.7-liter V6 (bumped to 4.0 liters) or a version of the 3.0-liter twin-turbo V6 engine used in the Q60 Red Sport. That engine is good for 400 horsepower in its current tune, and seems like the most likely option for the 400Z.

With that being said, we can't wait to see how the showdown between the 400Z and the Supra shapes up. Now if only Mazda could just revive the RX-7 for the true trifecta of legendary Japanese sports cars...