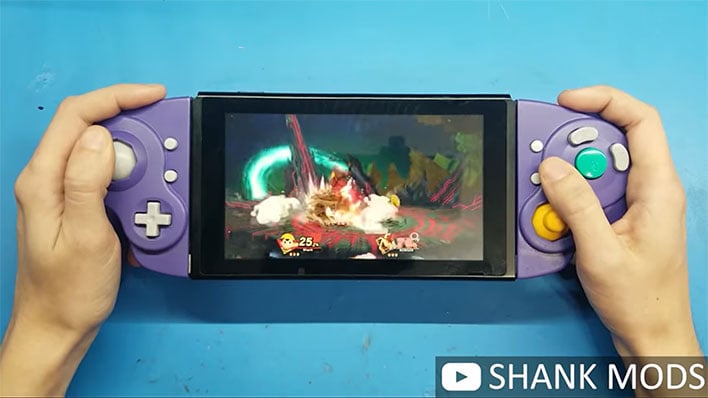 YouTube Shank Mods was the first to release photos and videos of his “GameCube Joycons”. Shank essentially reconfigured a Nintendo Wavebird wireless controller to pair up with a Nintendo Switch. Some of his biggest challenges included figuring out a way to include clicky buttons in the GameCube Joy-Cons and determining the correct soldering points.


Shank was eventually able to create a product that matches the original geometry, feeling, and aesthetic of the GameCube controller, but slides right onto the Nintendo Switch. His Joy-Cons even include HD Rumble, Gyro, and Amiibo support and work wirelessly. He claims that his gaming experience with his custom Joy-Cons is a “huge step up” from his previous experiences.

Shank was one of the first people to post about his GameCube Joy-Cons, but he was not the only person working on this kind of project. Flip Grip creator Mike Choi has also been tinkering with his own mash-up. Choi’s project is not quite finished, but there do appear to be a few differences between his controller and Shank’s controller. Choi’s creation seems to resemble more of a dock/controller combo than Joy-Cons. His creation is a bit larger and requires the device to be inserted into the dock.

Well, someone beat me to the punch but here’s a look at the current state of my Joy-Cube Switch dock/controller. Obviously an unfinished WIP! pic.twitter.com/LLl9F4ve7M

The beloved GameCube appears to be a source of inspiration for many modders. u/Littlewolf128 recently transformed a Japan-exclusive Spice Orange GameCube into a dock for their Nintendo Switch. u/Littlewolf 128 followed a YouTube tutorial by Rated E Mod that included the use of a dremel and 3D printer. They were then able to use a GameCube controller with their Nintendo Switch, which plugged directly into the GameCube dock. The project reportedly took roughly 4 weeks to complete. Nintendo does sell a Nintendo Switch Wireless GameCube controller, but there will always be a place in this world for creative modders.