It's only been out a bazillion years (small exaggeration), but Nintendo has finally got around to implementing Bluetooth audio support on its Switch consoles, a feature that has been absent since the original model launched back in 2017 (hard to believe it's been almost half a decade already!). The ability to pair Bluetooth audio devices arrives by way of the latest system update.
The Switch has always featured Bluetooth capabilities, but up to now was only used to connect the Joy-Con controllers. Pairing a set of Bluetooth earbuds or headphones has been frustratingly unavailable, at least natively—manufacturers have offered Bluetooth adapters for those who wanted to wirelessly pair a headset, but having a dongle protruding from the console is a bit clunky.
It's also old news... 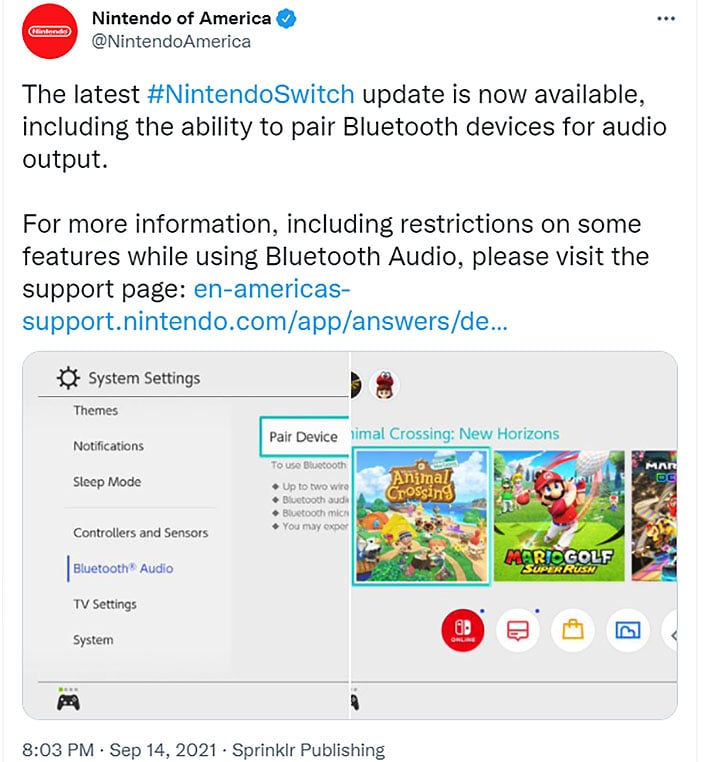 "The latest #NintendoSwitch update is now available, including the ability to pair Bluetooth devices for audio output. For more information, including restrictions on some features while using Bluetooth Audio, please visit the support page," Nintendo announced on Twitter.
Nintendo's newest software update for the Switch is version 13.0.0, and it is now available for both the regular Switch and Switch Lite consoles. Once applied, users will notice a new option titled "Bluetooth Audio" in the settings menu. What about those limitations, though? The biggest one applies to the number of controllers you can use while employing a Bluetooth audio connection.
If using a Bluetooth headset or earbuds, you will be limited to two wireless controllers. Note that each Joy-Con (left and right) count as a wireless controller, so there's your two controllers right off the bat. If you want to pair more for local multiplayer action (the Switch supports pairing up to eight controllers), you need to disconnect whatever Bluetooth audio product you are using.
Nintendo also notes that Bluetooth audio will automatically disconnect during local communication, like when starting a local wireless multiplayer game.
Here are the other notes and caveats...
It remains to be seen if Nintendo will address any of the limitations with a future update. Regardless, there is at least some form of Bluetooth audio support available, at long last, and just in time for the upcoming retail release of the Nintendo Switch OLED refresh.