Traveling by air can be a rather boring experience for many people. Not only do you sit in a cramped airplane seat surrounded by people and screaming kids while in the air, often travelers deal with long layovers that require you to sit in equally confined areas within a terminal. For many people reading or playing mobile video games are the best ways to pass the time. Nintendo has a new Experience that it wants to share with travelers at some airports around the country this month called the Nintendo Switch On The Go pop-up airport lounge.

Nintendo says that the airport lounge will launch in various locations starting on February 13 around the United States. Each of the lounges will include playable Nintendo Switch titles, giveaways, and more. In addition to featuring the Nintendo Switch, fans will also be able to get hands-on with the Nintendo Switch Lite. The demo areas at the lounges will include popular titles like The Legend of Zelda: Breath of the Wild, Mario Kart 8 Deluxe, Super Mario Odyssey, Super Mario Party, and Tetris 99 among other titles. 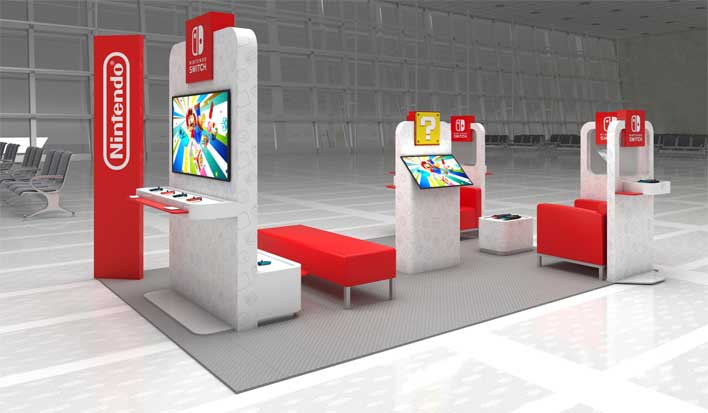 For travelers who decide to order a Nintendo Switch or Switch Lite while visiting the lounge in the airport, they will get a free carry case with their order. Travelers will also be able to order select Switch games and other Nintendo merchandise. Those who visit the lounge will get a free Switch branded luggage handle wrap and a $10 coupon from Target to use on any Nintendo purchase of $75 or more. Nintendo does note that both of those offers are while supplies last.

The first location for the On The Go lounge will be at Dallas Love Field Airport near Gates 14 and 16 starting on February 13 through March 26. On February 17 through March 29, On The Go airport lounges will be available at Dulles International Airport in Washington DC on Concourse B near the west entrance/exit near Gate B62. Seattle-Tacoma International Airport will have its pop-up lounge located in Concourse C next to Gate C10. Travelers to Chicago's O'Hare International Airport can visit in Terminal 1, Concourse B, between Gates B12 and B14. These gaming lounges may cut down on travelers taking over monitors to game in the airport like a man did in Portland back in January.