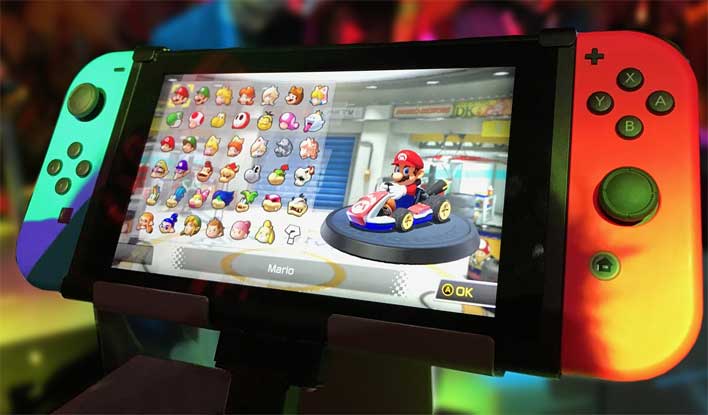 Nintendo of America has filed a pair of lawsuits in the United States to shut down resellers that are selling Nintendo Switch mods allowing users to play pirated video games on the console. One of the lawsuits was filed against Tom Dilts Jr., who is believed to be behind a website called UberChips. The second lawsuit that Nintendo filed was against multiple unnamed defendants who operate multiple websites.

From those websites, the defendants allegedly sell products from an anonymous group of hackers known as Team Xecutor. Nintendo's lawsuit says the defendants "unlawfully" design and manufacture an "unauthorized operating system" and "piracy tools" that allow gamers to bypass protections in place on the Switch console.

Nintendo says that the circumvention devices and the SX OS the group sells bypass the technology measures used inside the Switch, allowing the console to be used for "massive intellectual property theft and infringement." The legal team alleges that once the protection measures are disabled, players can download the unauthorized operating system and play pirated video games.

UberChips' website is currently down, however, some of the other sites named in the second lawsuit are still in operation. Those sites sold kits to hack the Switch for $47.99 and were pre-ordering devices to circumvent protection measures in place on the Nintendo Switch Lite, and the newer Nintendo Switch console models.

Nintendo's lawsuit says that the companies are causing it "tremendous harm" and have sold hundreds of devices. Nintendo is seeking $2,500 per trafficking violation and a permanent injunction to shut the websites down. The lawsuit was filed in the United States District Court for the Northern District of Ohio Western Division.

Perhaps the next Nintendo console will have more robust protections in place to thwart hackers. Reports earlier this month indicated that Nintendo was looking down the road to the next-generation Switch console, and was considering Samsung and AMD RDNA hardware.