During the pandemic, many people have had nothing better to do than play video games in their downtime, and the market is showing that trend. Console sales are up tremendously, and even though there has been a lasting chip shortage affecting production for all brands, the Nintendo Switch is outpacing both the PlayStation 5 family and the Xbox Series X|S.

For Q1 2021, Ampere Analysis reports that Nintendo Switch’s sell-through volume has hit 5.86 million units which is up roughly 12% compared to this time last year. However, this momentum may stagnate when Q2 comes around. This is because of how sales were affected during the pandemic and the massive launch of Animal Crossing: New Horizons, which drove sales. 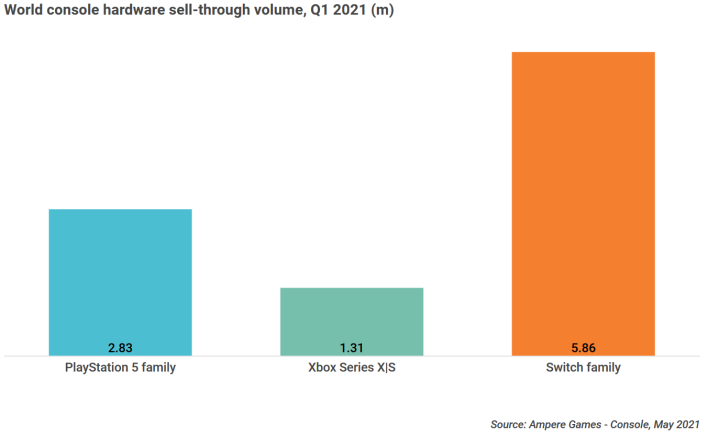 Interestingly, both Sony and Microsoft’s new console sell-through volume at 4.14 million units does not even come close to matching Nintendo’s. This is likely due to the supply issues relating to chip manufacturers around the world. However, this problem seems to have favored Sony as they have outsold Microsoft at an impressive 2-to-1 ratio.

As production hopefully begins to ramp up again, we may see this Sony lead level out and normalize against Microsoft. However, it is also possible that Sony will clutch onto the lead, which could pivot into better future sales (as it has in previous generations). It will be interesting to see what happens overall as people become vaccinated, masks come off, and the world returns to some sense of normalcy. The hope is that we will get to see this change sometime in Q3 or Q4 this year, so keep an eye on HotHardware for the console race currently led by Nintendo.