Over the weekend, new renders leaked of Samsung’s upcoming Galaxy S22 Ultra flagship smartphone. The renders gave us our first look at a dramatic departure from the Galaxy S family with respect to design and showcased a look more akin to the stalled Galaxy Note series.

Now, upcoming third-party cases presented by frequent gadget leaker Ice Universe seemingly confirm many of the design details seen in the earlier renders. For example, the cutout on the back of the case matches up with the odd-looking camera bump that could hold up to five cameras. We also see cutouts on the bottom of the phone for the USB-C port, speaker, and S Pen. 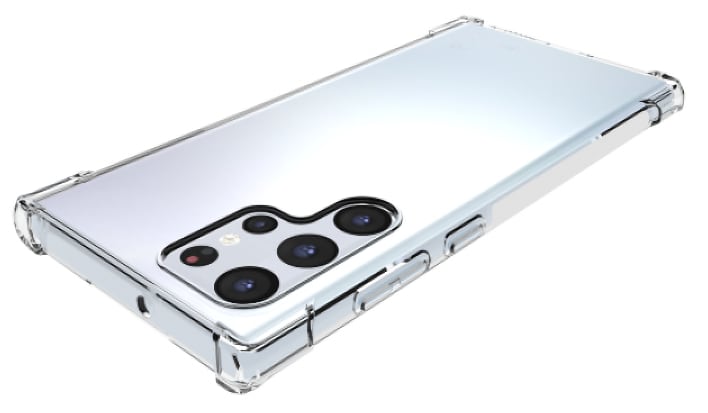 While the current generation Galaxy S21 Ultra supports the S Pen, it’s an optional accessory that can’t be carried with the device (at least, not without an accessory case). However, with the Galaxy S22 Ultra, there’s an actual silo to hold the S Pen and recharge it when not in use. This move all but confirms that the Galaxy S22 Ultra is destined to replace the Galaxy Note in Samsung’s flagship smartphone lineup (the Galaxy Note didn’t receive a 2021 design update).

Breaking：Samsung phone protective case manufacturer has begun to build S22 series protective case . We can see that the camera area is just like our rendered drawing, but unfortunately, It just knows the shape of this area, whether it is “P”or “11” , and he does not know. pic.twitter.com/yYtZF8lZXl

The Galaxy S22 family (including the Galaxy S22 Ultra) reportedly will be powered by Qualcomm’s next-generation Snapdragon 898 SoC. There’s also the possibility that global versions of the smartphone might feature the highly anticipated Samsung Exynos 2200 SoC with AMD RDNA 2 graphics. Other features on deck for the Galaxy S22 Ultra allegedly include a 6.8-inch 120Hz AMOLED display.

Samsung is likely to announce the Galaxy S22 family in January 2022, which would be quickly followed up by the preorder phase. Although there have been no leaks concerning pricing, Samsung will likely hold the line compared to the Galaxy S21 family. That means we should see the Galaxy S22, Galaxy S22+, and Galaxy S22 Ultra priced at $799, $999, and $1,199, respectively.