Samsung is bad at keeping secrets when it comes to its unreleased products. In the case of the upcoming Galaxy S21 family, we've pretty much already seen or read every detail about the smartphones before their rumored mid-January launch. Today, we're learning more about the Galaxy Buds Pro wireless earbuds that will be launching alongside the Galaxy S21, Galaxy S21+ and Galaxy S21 Ultra.

This time around, the new Galaxy Buds Pro details come courtesy of the Galaxy Wearable app, which made an early appearance in the official Galaxy Store. The app includes renders of the Galaxy Buds Pro, confirming the previous color options that we’ve reported on: black, violet, and silver.  The wireless earbuds can be safely nestled within a small carrying case that is charged with a USB-C cable or via Qi wireless.

The most important part of this recent leak, however, is that it reveals some of the new features that will be incorporated. One cool feature is voice detection, which senses when you are speaking, and in turn lowers the volume of the music (or other audio content) that is playing through your earbuds. The feature also automatically turns on the audio passthrough feature (i.e. if you're in active noise cancellation mode) so that you can converse with someone without actually missing a beat with your current audio track. You can set a custom timeout of 5, 10, or 15 seconds for this feature. 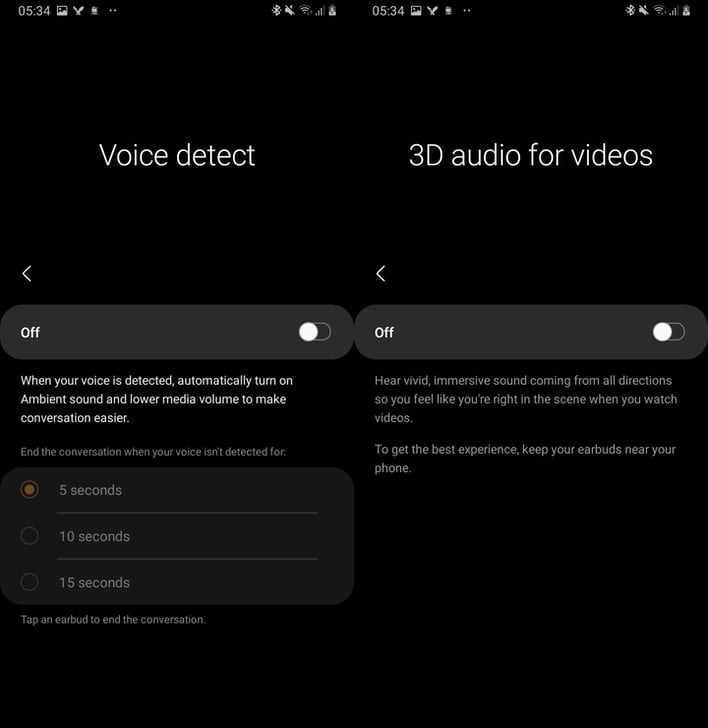 Speaking of active noise cancelation, the Galaxy Buds Pro will have two settings (low and high) to further customize your listening experience. Another new feature that has been added is the ability to independently adjust the volume of each earbud, which could be perfect for those that might suffer from specific hearing impairments to one or both ears. This setting is saved on-device, so your customizations will carryover from one device to another.

Perhaps the biggest addition, however, is what Samsung calls 3D Spatial Audio. The feature allows you to "Hear vivid, immersive sound coming from all directions so you feel like you're right in the scene when you watch videos." It uses head tracking to change the direction that sound is coming from based on how your head is positioned. If this sounds incredibly familiar, it's because Apple implemented the same feature for the AirPods Pro a few months ago with a firmware update. With the Galaxy Buds Pro, however, it will only be available with Samsung devices running Android 11 with One UI.

At this time, we still don't have any idea on pricing for the new Galaxy Buds Pro, but we'd assume that they'd be priced higher than the Galaxy Buds Live ($169). Stay tuned for more details as they leak...