Facebook has announced that new features are being added to Messenger, which aim to make it a safer place to connect and chat with friends and family. One of the new controls is a safety feature that will help millions of people avoid potentially harmful interactions and possible scams without compromising privacy. Facebook's strategy to keep people safe on Messenger is focused on giving users the information and controls needed to prevent abuse from happening, and detecting abuse and responding quickly if it occurs. Safety notices have been introduced in Messenger that will pop up in a chat and provide tips to help people spot suspicious activity.

The safety notices that do pop up will give users the ability to block or ignore someone when something doesn't seem right. This new security feature started rolling out on Android in March and will launch around the world for iOS next week. The social network is also using machine learning to looks at behavioral signals to help detect potential issues on the social network, such as an adult sending a large amount of friend requests or message requests to people under 18 years old. 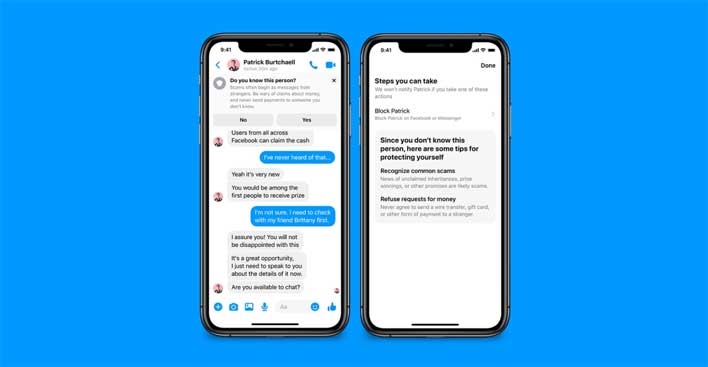 A big part of the focus is on keeping minors safe on the various Facebook platforms. Currently, there are special protections in place for minors that limit contact from adults they aren't connected to. Machine learning is used to detect and disable the accounts of adults who are engaging in inappropriate interactions with kids. Facebook's new feature educates people under the age of 18 to be cautious when interacting with an adult they may not know and allows them to take action before responding to a message.

Scams are rampant on social networks such as Facebook, and often people interact with someone online they think they know or trust, and it's really a scammer or imposter. These scammer accounts can be hard to identify. Messenger already filters potential spam or malware and offers tips to avoid common scams. The new safety notices will help to educate users on ways to spot scams and impostors. All of the new features are designed to work with full encryption, something critical as Facebook moves to end-to-end encryption. In other Facebook news, it recently purchased Giphy for $400 million and intends to integrate it with Instagram.