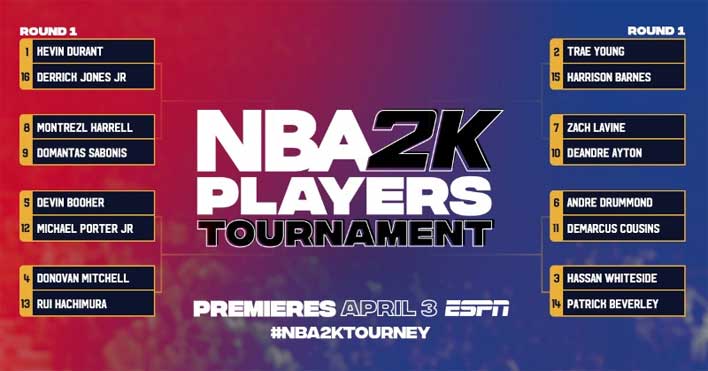 The coronavirus pandemic means that in-person gatherings of more than the number of people who currently live in your household are a non-starter. That means live sporting events are canceled all around the world, leaving athletes and fans alike with nothing to do. Several motorsports, including NASCAR and F1, turned to online events, and some NBA players are gearing up to do the same. The popular video game NBA 2K20 is set to start an NBA2K Players Tournament that will begin on April 3.

The tournament will be played in the video game and will be aired via ESPN, which is starving for content right now. The tournament pits 16 NBA players in head-to-head competition with the first round starting on Friday. The game is backed by the NBA and the NBA Player's Association.

Participants and seeding was set by in-game player rating and league tenure. Players participating in the event include: The timeline for the tournament includes the first game happening on Friday, April 3, on ESPN. The preview show will start at 7 PM with the first matchup featuring Derrick Jones Jr. vs. Kevin Durant starting at 7:30 PM and running until 8:30 PM. The tournament will continue from 8:30-11:30 PM Eastern time on ESPN2. On Sunday, April 5, on ESPN2, the tournament will air from 12-4 PM Eastern time. The quarterfinals will start on Tuesday, April 7, on ESPN2 7-11 PM ET. The semifinals and finals will happen on Saturday, April 11, with exact timing to be announced later.


Games will also be broadcast on NBA.com. The winner of the tournament gets to choose a charity to receive a $100,000 donation for coronavirus relief efforts. In other NBA2K news, the game honored the late Kobe Bryant in January after his tragic death.