NASA is 'Psyched' as preparations to explore a wild metallic asteroid nears launch in the Summer of 2022. It will be the first time NASA has explored a world not made primarily of rock or ice, but of metal.

NASA's Christmas day launch of the highly anticipated James Webb Space Telescope (JWST) captivated those who have been looking forward to its launch. Along with JWST, however, many also await the launch of the Double Asteroid Redirection Test (DART) as it journeys to an asteroid in order to provide data about how to possibly divert the object and prevent an impact with Earth. But NASA and its partners are not planning only a single mission of this type. It is also in preparations to send another spacecraft on a journey that will total 1.5 billion miles (2.5 billion kilometers) through space as it rendezvous with another asteroid.

Pysche is both the name of the spacecraft as well as the name of the metal-rich asteroid hurling through outer space. The asteroid is in fact so distant that from Earth, and current space-based telescopes, the asteroid appears as only a fuzzy blur. It is about three times further away from the Sun as Earth. Two things scientist do know about asteroid Psyche are that it is shaped kind of like a potato and spins on its side.

Asteroid Psyche has an average diameter of about 140 miles (226 kilometers), or about the length of the State of Massachusetts, if you leave out Cape Cod. It is estimated to have a surface area of approximately 64,000 square miles or about 165,800 square kilometers. Scientists and astronomers believe that the asteroid was most likely the survivor of multiple violent hit-and-run collisions that were more common during early galaxy formation. It is because of this that NASA hopes to possibly learn more about how the Earth's core, and other terrestrial planets, came to be.

Asteroid Psyche was discovered on March 17, 1852 by Italian astronomer Annibale de Gasparis. He named the asteroid Psyche for the Greek goddess of the soul who was born mortal and married Eros (Roman Cupid), the god of love. 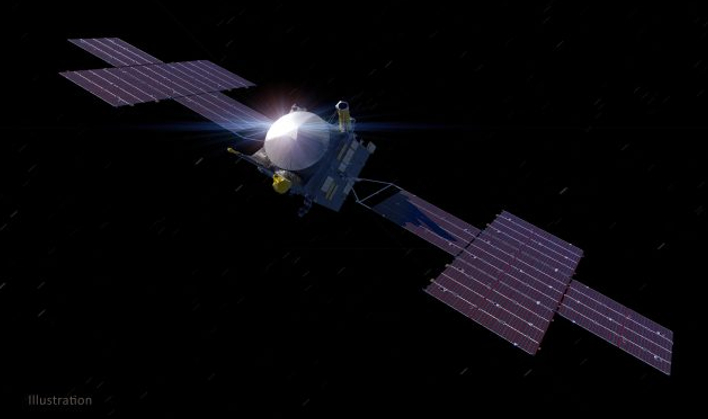 The Multispectral Imager will provide high-resolution images using filters to discriminate between Pysche's metallic and silicate constituents. The setup includes two identical cameras that are designed to acquire geologic, compositional, and topographic data. The second camera will serve to provide redundancy for mission-critical optical navigation. The Gamma Ray and Neutron Spectrometer will detect, measure, and map Psyche's elemental composition. The third instrument, the Psyche Magnetometer, is designed to measure and detect the remnant magnetic field of the asteroid.

"If it turns out to be part of a metal core, it would be part of the very first generation of early cores in our solar system," stated Arizona State University's Lindy Elkins-Tanton, who is also principal investigator and leads the Psyche Mission. "But we don't really know, and we won't know anything for sure until we get there. We wanted to ask primary questions about the material that built planets. We're filled with questions and not a lot of answers. This is real exploration."

Spacecraft Psyche will have a very long journey after launch. About nine months after launch, it will use the gravity of Mars to slingshot itself past. It will then continue its 1.5 billion mile journey arriving at asteroid Psyche sometime in late 2025 to early 2026. Over a period of approximately 20 months, the spacecraft will use its gentle electric propulsion system to dip into lower and lower orbits. This should allow for measurements of the gravity field to become more precise as the spacecraft gets closer, as well as allowing the team to improve their understanding of the body. When all is said and done, the spacecraft will settle into an orbit about 53 miles (85 kilometers) above the asteroid's surface.

Elkins-Tantos said, "Humans have always been explorers. We've always set out from where we are to find out what is over that hill. We always want to go farther; we always want to imagine. It's inherent in us. We don't know what we're going to find, and I'm expecting us to be entirely surprised."