NASA's Curiosity rover has been sending images back from the surface of Mars since its landing in 2012. The latest of those images was a 360-degree selfie that would make any teenager back here on Earth envious.

The Mars Rover Curiosity landed on the surface of the red planet on August 5, 2012. Since that time it has been sending back data and images that have helped NASA scientists learn more about Mars and its ability both past and present to support life. The rover is about the size of a small SUV coming in at 10 feet long, 9 feet wide, and 7 feet tall (not including the arm). It features a geology lab, rocker-bogie suspension, a rock vaporizing laser, and a plethora of cameras. Those cameras captured video of NASA's Ingenuity Helicopter zooming around Mars not too long ago. It most recently used one of those cameras to send back a marvelous selfie from the surface of the red planet. Or an epic photo bomb of a panoramic shot of Mars, depending on your perspective.

The camera Curiosity used to snap the image of itself was the Mars Hand Lens Imager (MAHLI). The MAHLI is likened to that of a geologist's hand lens and it is typically used to capture close-up images of the minerals, textures, and structures in Martian rocks and the surface layer of rocky debris and dust. Scientists are capable of viewing Martian features smaller than the diameter of a human hair with MAHLI. The actual 360-degree selfie the rover sent back was comprised of 81 individual images taken on November 20, 2021.

In the image, along with Curiosity you can also view some of the landscape of Mars. The rock structure located behind the rover is "Greenheugh Pediment" and the middle distance on the right is the hill known as "Rafael Navarro Mountain." Currently Curiosity is making its way to the U-shaped opening behind the rover itself to the left called "Maria Gordon Notch." In the image below, you can get a sense of the trek it has been on and where it is currently located on the Martian surface.

The MAHLI camera is capable of taking images up to 1600x1200 pixels. It is similar to that of a consumer digital camera and includes an autofocus capability. The camera is located on the turret end of the rover's robotic arm and has a focal length range from 18.3mm to 21.3mm at infinity. The camera has the ability to create images with a resolution of 13.9 microns/pixels, and take video at 720p. It incorporates white light sources, similar to that of a flashlight, and ultraviolet sources similar to that of a tanning lamp, to be able to capture images in both day and night time settings. All of this technology has been used to send back some spectacular images, like the recent selfie.

Currently Curiosity has been on the red planet for nearly 3,316 days. During that time the rover has roamed Mars completing the first phase of its mission called First Drive. While performing First Drive NASA put the rover through its paces as it performed basic functions to ensure it had made the trip without any damage and to ensure the rover's stability in regard to navigating the Martian terrain. Curiosity is now partaking in its second phase of its mission which is Surface Operations. In this phase it will learn about Mars through the day-to-day activities it performs. 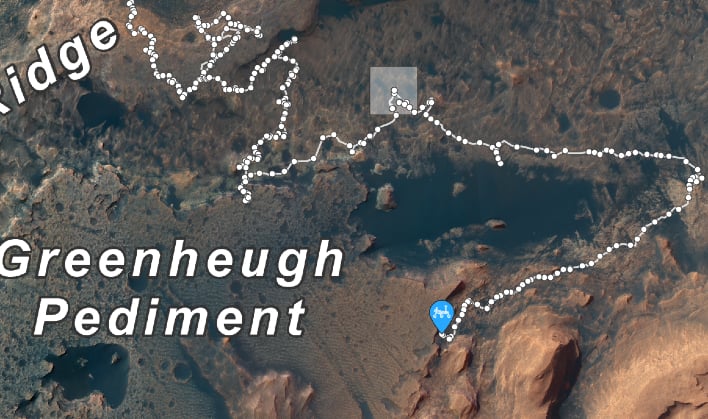 As Curiosity continues to send back data and images from Mars, scientists will continue to try and glean every bit of information about the red planet they can. Various companies like Blue Origin and SpaceX have partnered with NASA to begin placing human-kind back on the moon and eventually for long intervals in low Earth orbit beyond just the International Space Station. As we continue to venture further into the depths of space as inhabitants, the information collected now from Mars is crucial to figuring out how hospitable the red planet will be for future human habitation.