Why NASA Is Closely Watching Eruption Of Hawaii's Mauna Loa, The Largest Volcano On Earth

Hawaii's Mauna Loa volcano erupted for the first time in 40 years, and has NASA watching a few of its space-related facilities in the nearby area. Mauna Loa is the world's largest volcano, which erupted late Sunday, November 27, 2022.

According to U.S. Geological Survey, Mauna Loa erupted at 11:30 p.m. local time. Since the initial eruption, the volcano's alert level has risen from an "advisory" to a "warning". This is the first eruption of the mammoth volcano since 1984, according to the U.S. Geological Survey's (USGS) Hawaii Volcano Observatory daily update. While most of the space-related facilities are located atop the summit of Maunakea, a few could be at risk depending on how things play out.

"The lava right now is confined to the caldera," John Torrey, an astronomer at the University of Hawaii stated in an email sent to Space.com. "It may subside, it may flow south, we don't know. There is some ash flying around, and we are in shutdown state." 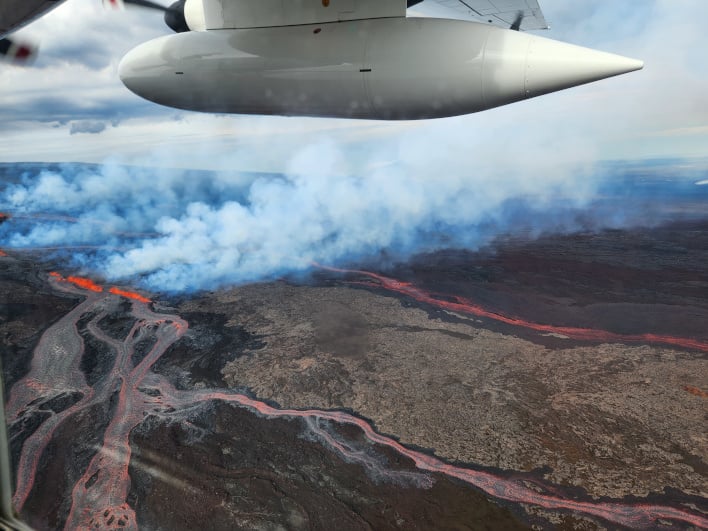 The facility that is perhaps being watched the closest is the Asteroid Terrestrial-Impact Last Alert System (ATLAS). ATLAS is an asteroid impact early warning system developed by the University of Hawaii and funded by NASA. In the case of an asteroid being detected, it provides a warning time depending on the size of the asteroid. Larger asteroids can be detected further from Earth, according to the ATLAS website. A small (~20 meter) asteroid can be seen several days out, while a 100-meter asteroid can be detected several weeks out.

The USGS cautioned, "Based on past events, the early stages of a Mauna Loa eruption can be very dynamic and the location and advance of lava flows can change rapidly." The agency warned that while lava flows are currently contained, "if the eruptive vents migrate outside its walls, lava flows may move rapidly downslope."

"Out of caution, our observers won't be going up there today," remarked Holly Gilbert, a solar scientist, and director of the High Altitude Observatory, in an interview with Space.com. "It's possible there could be lava erupting on the summit for weeks without danger to the observatory."