NASA made the very difficult decision to delay the launch of Artemis I just two minutes after the two-hour launch window opened at 8:33 a.m. Eastern. While disappointing, NASA Administrator Bill Nelson said, "We don't launch until it's right."

The long-awaited launch of Artemis I will have to wait a bit longer, as an issue with an engine bleed has caused the team to scrub the launch this morning. When asked what an engine bleed meant on its Twitter account, NASA responded, "An engine bleed is part of our regular pre-launch operations to prepare the engines. Teams prefer to not put super cold fuel in warm engines, so we run liquid nitrogen through them first to chill them down." 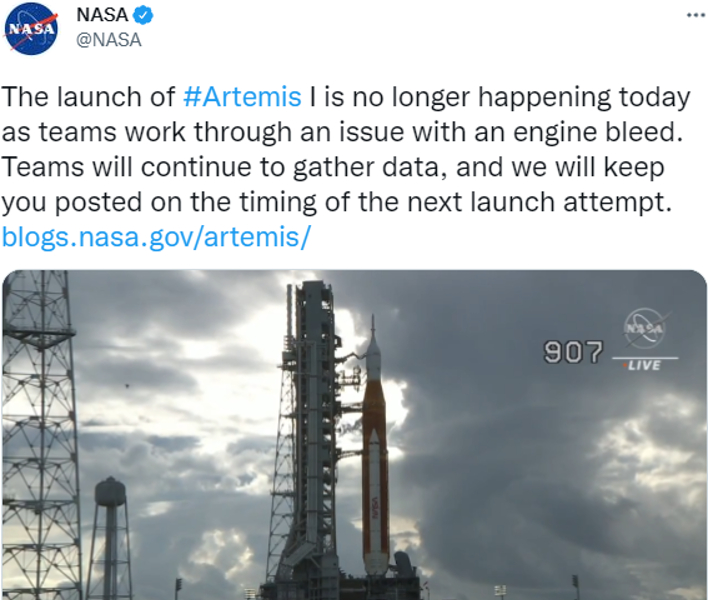 Artemis I is the first of a series of missions that will return humans back to the surface of the Moon, and beyond. This mission will not have any human astronauts aboard but will have several "manikins" along for the ride for testing purposes, as well as other preliminary tests.

"This is just part of the space business, and it's part of, particularly, a test flight," Nelson commented after the delay was announced. "We are stressing and testing this rocket and the spacecraft in ways you would never do it with a crew on board. That's the purpose of a test flight."

As disappointed as the 25,000 NASA workers, dignitaries and other guests at the Kennedy Space Center may have been to hear the news of the delay, everyone would have to agree that it was the right decision to make with a $4.1 billion rocket at stake. The SLS is the most powerful rocket ever built for the civilian space agency and will be the pure power behind all of the missions that will return astronauts back to the Moon over the next three years.

In terms of when the next launch will be attempted, NASA is reporting the earliest date and time will be on Friday, September 2nd at 12:48 p.m. Eastern. If this launch date is missed for some reason, the next available date would be around September 5th. After that, the team would have to take the massive rocket back to the Vehicle Assembly Building for servicing.

Stay tuned to HotHardware for any future updates concerning Artemis I and when the next launch might be.