As we approach the practical physical limits of silicon-based semiconductor manufacturing, researchers have been frantically searching for the next advancement that will allow us to continue producing faster and faster chips. Some folks are looking at exotic materials, some folks are counting on advancements in layout and design, and still other scientists are checking out clever ways to optimize existing structures.

The most recent breakthrough falls into the latter category. Researchers from the German research lab at Helmholtz-Zentrum Dresden-Rossendorf (HZDR) have experimentally demonstrated what was only a theory before—putting Gallium arsenide under tensile strain increases its performance as a semiconductor medium. Essentially, it's just like when you made a cup phone as a kid and discovered that it doesn't work unless you pull it taut. The tighter the material is stretched, the more easily electrons can flow through it.


Gallium arsenide (GaAs) isn't some exotic material; it's used a lot for industrial manufacturing. What's exotic here is the specific structure that the HZDR researchers fabricated: GaAs nanowires with an InAs outer sheath. The crystal structures in the shell and the core have slightly different lattice geometry, and that difference puts tension on the GaAs core inside. 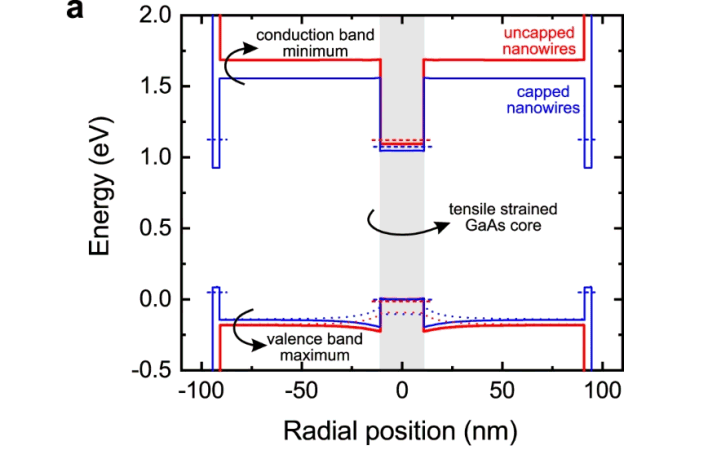 As Dr. Emmanouil Dimakis explains, "We influence the effective mass of electrons in the core. The electrons become lighter, so to speak, which makes them more mobile." The effective performance gain in this configuration is about 30% over nanowires made from bulk GaAs. That number probably isn't directly transferable to anything practical, but that's the next step: developing prototypes of practical products based on this concept.


So it goes with anything at the research stage; it'll be years before we see this concept in anything marketable. Still, it's encouraging to know that research is still finding advancements like this.
Article image credit to HZDR/Juniks.