Have you built a machine recently, loyal HotHardware reader? If you have, then it probably included an M.2 SSD, and if it did, then you're well aware of the annoyance that is the M.2 screw. Too small for the screwdriver you use for the rest of the PC, and terrifyingly tiny if you drop it on the floor, the screw is decidedly the biggest M.2-related nuisance.

It's the sort of thing that makes infomercial stars scream, "there has to be a better way!" Well, as it turns out, there is, or at least will be. MSI is debuting a feature called "Screwless M.2 Shield Frozr" on its Socket AM5 motherboards. The company demonstrated it during its livestream back at Computex in May, but the presenter had some trouble with it and it was hard to see how it works. 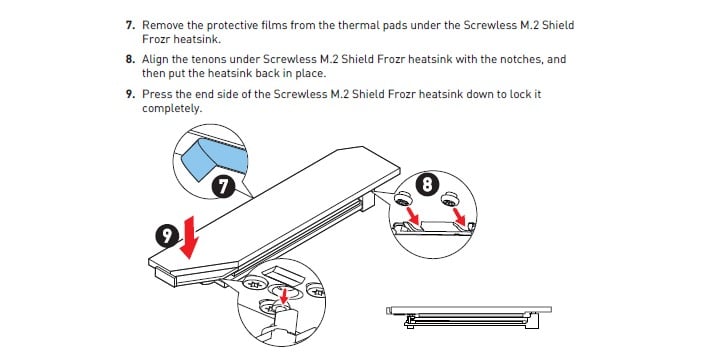 Now, thanks to Twitter user and occasional leakster chi11eddog (@g01d3nm4ng0 on Twitter), we have a few leaked images that seem to illustrate the feature in better detail. One appears to be from the product page of an MSI motherboard, another one looks like it's a snip from a manual, and the third appears to be some kind of industrial diagram. We'll embed them all here so you can eye them up.

It looks like the system is a whole mount-and-heatsink combo setup, as we don't think the mount would work properly without the heatsink in place. Essentially, you install the M.2 SSD around a stationary peg, snap a couple of pegs on the heatsink into the bracket around the M.2 socket, and then you pop the retention peg from the M.2 socket into the other end of the heatsink. 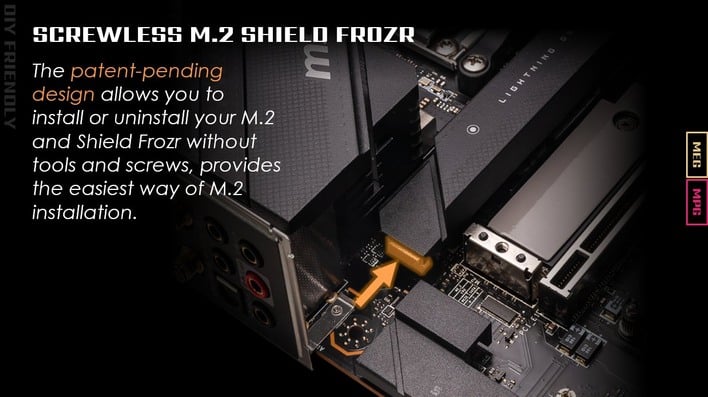 M.2 SSDs can work just fine without a screw holding them down—don't ask how we know this—so it's not like they need a bunch of mounting pressure like a CPU heatsink. The heatsink that they're using is nice and beefy, too, although we wish it had fins or at least ridges to improve the surface area. As it stands, the top of the heatsink is a flat piece of anodized aluminum that doesn't look like it will actually dissipate much heat.


Chi11eddog says the design is coming on MSI Socket AM5 motherboards with X670 and B650 chipsets, as well as others. One of the images says the feature is patent-pending; hopefully that doesn't dissuade other vendors from trying similar ideas (ASUS showcased a screwless design of its own last year). Eliminating the terrible M.2 screw would remove one more irritation from DIY PC building.