This has been a weird and trying year in many respects. Obviously the health ramifications of a deadly virus top the list. Far less important, but also interesting in its own respect, is the shortage of certain PC hardware, including AMD's latest generation Zen 3 CPUs, and the newest graphics cards from AMD and NVIDIA. As it pertains to GPUs, MSI has some interesting things to say on the matter, specifically as it relates to the Radeon RX 6000 series.
For the time being, MSI intends to only focus on its 'Gaming' series, for Big Navi. What that effectively means for consumers is a smaller selection of models to choose from, than what would normally be the case. But with supplies being what they are, MSI felt it was best to focus on one particular sub-category, which will include both stock-clocked and factory overclocked SKUs.
"So this is our Gaming card, this is Gaming X Trio, and like we have already talked to you before, maybe you’ve missed it, we are only going to focus on this. So we didn’t plan any other SKUs, meaning blower type fan design or 'Suprim' [models], something like that. Not at this moment because we don’t get enough supply. And it’s then better to only focus on one SKU. In the future, we will see," MSI's Eric Van Beurden said during an MSI Insider broadcast.
The end result of this decision is a total of four Radeon RX 6800 XT and 6800 SKUs. Have a look... 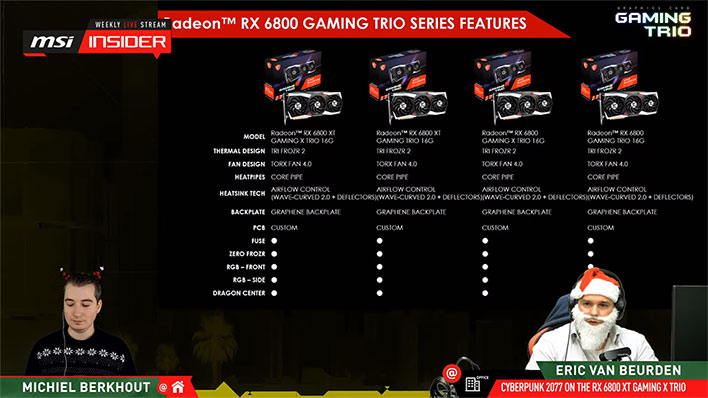 All four cards sport custom cooler designs with three fans, and all four also have a graphene backplate for added durability. Clockspeeds will vary, with the X Trio offering goosed clocks, and the regular Trio cards sticking to AMD's reference speeds.
It is an interesting decision. Typically add-in board (AIB) partners flood the market with a dizzying array of options for different GPUs. Some might even argue there are too many SKUs, in certain instances. MSI apparently does not have that luxury with Big Navi, though, because if it went that route, it would spread itself too thin. So the decision was made to allocate its entire inventory of GPUs to its Gaming series.
Later on in the stream, Eric put an MSI Radeon RX 6800 XT Gaming X Trio on the operating table and gave it the teardown treatment. Have a watch...

It is always interesting to see a cooling shroud get removed from a graphics card. Today's designs are big and sometimes complex, and it can be a daunting experience if you have never done it before. Of course, there are not many reasons why you might want to disassemble a graphics card. The two main ones are to reapply the thermal paste on the GPU, and to swap out the cooler, like we showcased with our Arctic Accelero IV review a couple of years ago (on a GeForce GTX 1080 Ti Founders Edition).
The card in the teardown video above sports a 12+4 power phase design (GPU and VRAM). It draws power from a pair of 8-pin PCIe connectors, and sports a 35MHz factory overclock (boost clock) out of the box.