It's no secret that NVIDIA is on the verge of releasing the GeForce RTX 3070 Ti and the GeForce RTX 3080 Ti. Despite the continued supply issues with both non-Ti versions of these cards, NVIDIA’s performance train must keep moving. However, it looks as though MSI jumped the gun a bit earlier today when it updated its website to include a product category for its upcoming GeForce RTX 3080 Ti graphics card family.

When visiting MSI's website, you can navigate to Products --> Graphics Cards --> NVIDIA GPU to see a listing of all its available NVIDIA-based graphics cards. You can filter your search based on the GPU, and this is where MSI jumped the gun by including a filter for the GeForce RTX 3080 Ti. 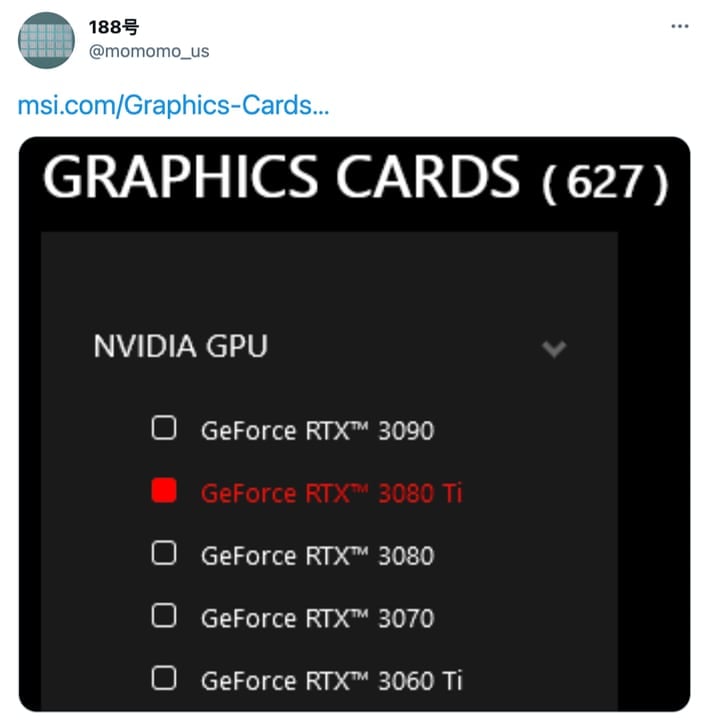 We don't know if MSI eventually saw the error in its ways by providing this filter before the official launch or if NVIDIA told its long-time partner to "knock it off," but it has since vanished from the website.

The GeForce RTX 3070 Ti and GeForce RTX 3080 Ti will [allegedly] get an official announcement later this month with availability in June. We all know that both cards will be near-impossible to purchase from retailers, so we'll just sit and cry in a corner until the whole enthusiast computing sector gets back to some semblance of normalcy.