In a deleted post on Reddit, a user shared a photo of multiple retail boxed MSI GeForce RTX 3080 Ti graphics cards that a retailer in the UAE supposedly shared with them. NVIDIA has not yet announced the new SKU, but the leaks and rumors are piled up a mile high at this point, leaving little doubt that a GeForce RTX 3080 Ti launch is imminent.
We still do not know with 100 percent certainty what the specifications will be and how pricing will shake out. Unofficially, the new SKU is expected to feature 10,240 CUDA cores and 12GB of GDDR6X memory tied to a fat 384-bit bus, the same bus width as found on the GeForce RTX 3090. It's also said the Ti variant of the 3080 will have a 1,396MHz base clock and 1,695MHz boost clock.
What's interesting about the most recent spec leaks is that they're downgraded from previous leaks, which initially showed the GeForce RTX 3080 Ti as wielding 10,496 CUDA cores and 20GB of GDDR6X memory. The assumption is that AMD did not bring enough competition at the high end to compel NVIDIA to stick with the higher specs.
While none of this is official yet, we are pretty confident the 12GB of GDDR6X memory is at least accurate. That is what has shown up on leaked retail packaging, as well as on the stickers of a supposed pallet of MSI GeForce RTX 3080 Ti Ventus 3X 12G OC graphics cards, depicted in a photo as the cards were being prepped for shipment from China to the United States.
As to the Reddit post, user FaisalKhatib posted a photo of MSI's Suprim X model (see above). They don't call out the retailer by name, but did say the store is already selling the card, priced at around $3,500. Insert puke emoji—its rumored the MSRP will be $999, and even though custom models will command more, that is an outrageous price. 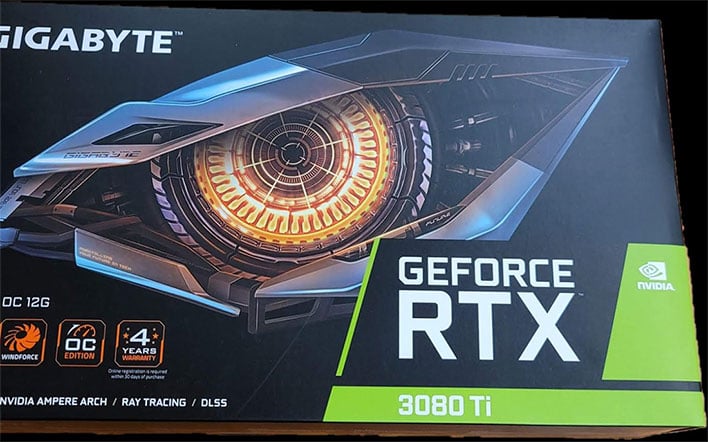 Meanwhile, YouTuber Moore's Law Is Dead posted a photo of an actual retail box (read: not a render) containing a Gigabyte GeForce RTX 3080 Ti graphics card.
"Just to confirm from my end—the RTX 3080 Ti 12GB is certainly real, and coming soon. I obviously blacked out the background to protect someone, but that's a real 3080 Ti someone I know has their hands on...," he wrote on Twitter.
Add this one to the growing number of images indicating the GeForce RTX 3080 Ti will in fact arrive with 12GB of GDDR6X memory, and not 20GB.
It makes sense that these types of leaks are happening with greater frequency lately—rumor has it NVIDIA will finally launch the GeForce RTX 3080 Ti in just a few weeks, towards the end of this month. Stay tuned, because if it happens, you can be we will be all over it.