NVIDIA's so-called "BFGPU," the GeForce RTX 3090 has been in short supply since its release last month. The audience for the world's fastest graphics card might be a little limited thanks to its $1,500 MSRP, but that hasn't stopped them from fetching far more than that on eBay. One element that was missing at launch was a large pool of cards from NVIDIA's manufacturing partners. However, thanks to a defective graphics card swap, one Redditor got their hands on a new model from MSI: The GeForce RTX 3090 SUPRIM X.

According to the poster "Wet-Goat", they received the card as a swap for the card they'd intended to purchase, an ASUS ROG STRIX GeForce RTX 3090 that was defective. This card supposedly has a turbo boost of 1,965, a cool 270 MHz faster than the default 1,695 MHz of the NVIDIA Founder's Edition that we reviewed. According to Wet-Goat, the card maxes out its power limit at 107% of the default in MSI Afterburner, so there's not a lot of extra power headroom available. 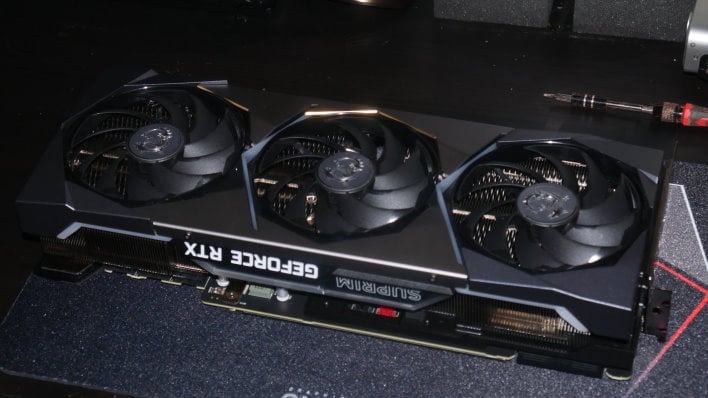 There's quite a gallery of pics of this new model in their Reddit thread. What's obvious from the photos is that there's a huge heat sink that runs the length of the card, which is kept cool by a trio of well-proportioned fans. There's also a whopping three eight-pin PCI Express connectors. Those ports can take 150 Watts of power a piece, so that means the card can draw 450 Watts by those connectors alone. That matches what the BIOS reports to GPU-Z, according to the poster. This card has some serious LED bling, which Wet-Goat says is RGB and adjustable with MSI's Mystic Light Sync.

Apparently the GeForce RTX 3090 SUPRIM X has a couple of extra goodies beyond a Founders Edition card, the most interesting of which is a stand for the card so that it doesn't sag and add any undue torque to the PCI Express slot. The SUPRIM X must weigh quite a bit to warrant such an accessory. The very large heat sink, triple fan array, and apparently a fully-metal shroud, including a metal backplate, no doubt add quite a bit of weight to the card. Wet-Goat says this card is 332 millimeters long, which works out to 13.07 inches in imperial measurements. 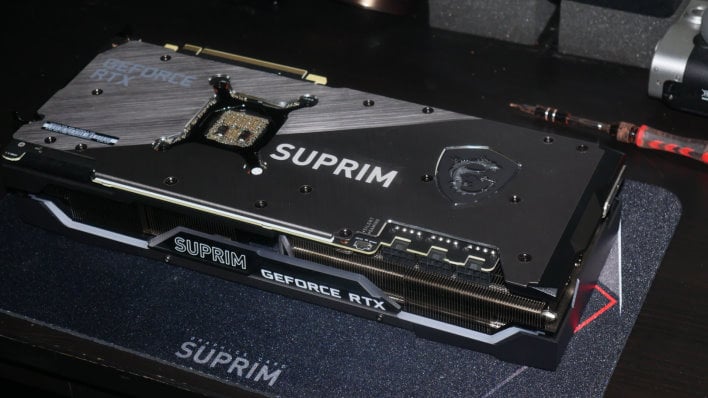 We should see for ourselves before too long what MSI's GeForce RTX 3090 SUPRIM X has in store. Reportedly, MSI plans to launch the GeForce RTX 3090 SUPRIM X sometime later this month and the X in the name apparently stands for factory overclocking. Official pricing and performance figures are unknown, though. We're hoping that forthcoming new models like this mean that supply will start to relax and pricing will come back down to earth, but only time will tell.