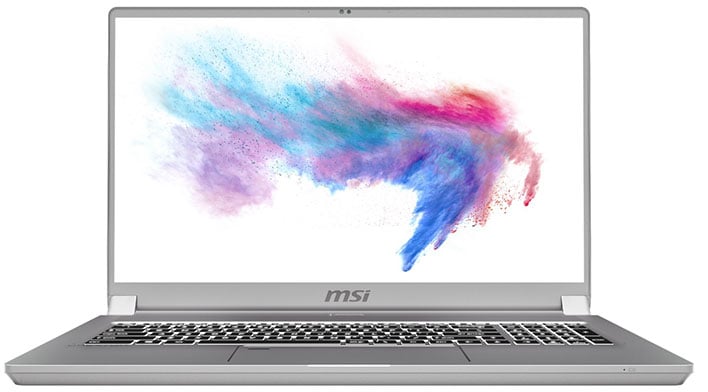 MSI is looking to make waves at the Consumer Electronics Show (CES) in Las Vegas next month with its Creator 17, the world's first laptop with a mini LED display. According to MSI, it provides "top-notch, true-to-life color accuracy" with 100 percent coverage of the DCI-P3 color space. It also boasts high dynamic range (HDR) support with a peak brightness of more than 1,000 nits.
"Mini LED is a game-changing technology that has the potential to be used on all electronic displays. It has a simpler structure with better performance, combining all the strengths of other display technologies. Until now, Mini LED has only been used in some TVs, but with leading global display manufacturers shifting production focus to Mini LED, its estimated market value has reached a staggering $1 billion USD, and it's expected to be adopted by a variety of industries within the next few years, from laptops to smartphones," MSI says.

Normally these kinds of statements would get chalked up to marketing fluff, though in this case, MSI isn't wrong. Mini LED technology is potentially a big deal. The hope is that it will deliver the same kind of bright, crisp, and vibrant image quality that OLED displays are known for, but without the nasty side effect of screen burn-in.
To be fair, modern OLED displays have gotten better about avoiding burn-in, but they are not immune to it. This can be problematic in certain situations, such as playing games with persistent HUDs and watching TV channels with static logos and information bars. Image retention is not a problem with mini LEDs, though, so the sooner the technology can enter the mainstream, the better.
In this case, MSI says its Creator 17 laptop is DisplayHDR 1000 certified. It has 240 zones of local dimming control, and though it's not advertised, in theory it should not suffer from halo or bloom, which is when light spills out from bright images into neighboring zones.
MSI is playing it coy about the rest of the hardware, saying only the Creator 17 will arrive with the "latest in CPU and GPU processing power." That leaves the field wide open. it will also feature the first Type-C port to support 8K image output, and the world's fastest UHS-III SD card reader with a speed of up to 624MB/s.
Stay tuned, as will revisit this laptop after it makes a debut at CES.