Mozilla Firefox 100 Is Packed With Upgrades But Can It Win Back Chrome Users?

Do you remember what you were doing towards the tail end of 2004? One thing you might have been doing was navigating the web with Firefox version 1.0, which emerged in November of that year and would later become a hugely popular alternative to Internet Explorer. Now almost 17 and a half years later, Mozilla is celebrating the release of Firefox version 100, but many of the same people who embraced the IE alternative are now using Chrome instead. This raises the question, are Firefox's best days behind it?
In terms of features, capabilities, and support, Firefox's best days are right now. Mozilla has had nearly two decades to groom and evolve Firefox into a mature browser, and the latest release adds a bunch of new and improved features to the mix. For example, picture-in-picture mode now supports video captions and subtitles on YouTube, Prime Video, Netflix, and websites that use WebVTT.
Firefox 100 also brings HDR support to the browser on Mac (starting with YouTube), and enables hardware accelerated AV1 video decoding on Windows with supported GPUs (Intel Gen 11+, AMD RDNA 2 except for Navi 24, and NVIDIA's GeForce RTX 30 series). There's also a video overlay enabled on Windows for Intel GPUs, which should reduce power usage during video playback.

In addition, Mozilla added the ability to spell check in multiple languages, tweaked the scrollbars on Windows 11 and Linux so they won't take up space by default, and added support for auto filling credit card fields and capture in the UK. 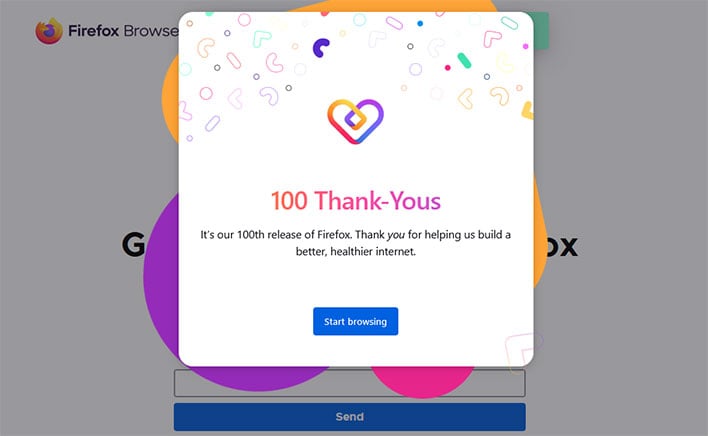 This is all on top of a host of bug fixes, security patches, and other general changes. And that's all great, but unfortunately for Mozilla, it's long-running browser is no longer the disrupting force it once was. There's nothing in Firefox 100 that will change that.
Before the Firefox faithful come at me, let me say that I use Firefox often (as in, on a daily basis), and really like it. I also use Chrome, and occasionally fire up Edge, which is based on the same Chromium foundation as Chrome.
The market share figures tell the story, though. If going by StatCounter's figures, Firefox accounts for 3.41 percent of all browser usage, tailing Edge at 4.07 percent, Safari at 19.13 percent, and Chrome at 64.36 percent. The numbers change a bit if narrowing the accounting to just the desktop, but Firefox still comes in behind Safari and Edge, and way behind Chrome.
NetMarketShare's accounting isn't drastically different—Chrome dominates like IE once did, and Firefox comes in behind Edge on the desktop, and behind Safari as well on mobile.
If you're a Firefox fan and you're looking for the sliver lining, it's that Mozilla is still hanging around and championing a multi-browser landscape to keep the web honest. And though Chrome is way out ahead of all other browsers, the rise and fall of IE is proof that no single browser is ever too big to fail.
That was a much different time period, though, and a different web. How things play out going forward is hard to predict, particularly with the metaverse, or Web 3.0, on the horizon. In any event, you can check out Firefox 100's release notes for the full list of changes.