It's been over three decades since The Secret of Monkey Island graced the PC with a lovable would-be pirate, clever puzzles, and the distinct humor that was a staple of Lucasfilm (and later LucasArts) adventure games. Several sequels later, we're still left wondering what the real secret is. It may or may not ever be revealed, but here's another secret—legendary game designer Ron Gilbert has been working on a Monkey Island sequel for the past two years, and it's launching in 2022!
This is wonderful and shocking news for gamers who, like myself, grew up playing point-n-click adventure games and still have a strong nostalgic affinity for that era of gaming. Where the "shocking" part comes into play is because Gilbert famously stated in a 2013 blog post, "The only way I would or could make another Monkey Island is if I owned the IP."
Gilbert hilarious addresses this statement in the Return to Monkey Island trailer that just dropped. Have a look...

Gilbert (who also goes by Grumpy Gamer) actually teased the development of another Monkey Island a few days ago on April 1, and at the time, I didn't take it seriously.
"For 18 years the Grumpy Gamer blog has been April Fools' day free because it's a stupid tradition. So to mix things up a little I'm taking this opportunity to announce I've decided to make another Monkey Island," Gilbert wrote on his blog.
Turns out he wasn't joking, not unless Lucasfilm Games is both in on the gag and willing to keep it going (both unlikely)—now three days later, Lucasfilm has announced the game on Twitter, as has Devolver Digital. Terrible Toybox, the Gilbert-led studio that release Thimbleweed Park in 2017, is also involved. 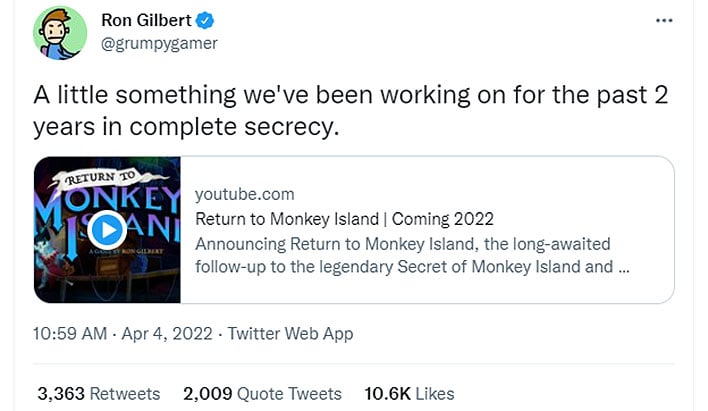 While the cat is now out of the bag, there's still quite a bit of secrecy surrounding the game. Devolver Digital says the game "picks up where Monkey Island 2: LeChuck's Revenge left off," but nothing more.
Gilbert was involved with the first two Monkey Island games, but not the subsequent installments (The Curse of Monkey Island, Escape from Monkey Island, or Tales of Monkey Island). It will be interesting to see what the upcoming sequel entails, both in terms of story development and in visual and stylistic makeup. In the aforementioned blog post, Gilbert laid out his vision for another Monkey Island game, but that was posted nine years ago.
One of the things he mentioned at the time was getting rid of the verbs. He included them on Thimbleweed Park, though that was more of an homage to the earlier point-n-click style and specifically a spiritual successor the first Maniac Mansion game. One thing I can say definitively is that I can hardly wait to find out.