Listen up folks, if you want to score a mammoth payday in the future, start being a pack rat. Remember all those comic books, baseball cards, and collection of original Garbage Pail Kids you had as a kid, and got rid of long ago? Some of them might have been worth a mint. So goes for an individual who managed to hold onto an seal copy of Super Mario Bros. for the Nintendo Entertainment System (NES), and just sold it at auction for a cool $660,000.
Original NES games are fetching big money these days, like an also-sealed Super Mario Bros. 3 cartridge that sold at auction for $156,000 last year. Like that game, the first Super Mario Bros. game is not exactly rare by any stretch, or even expensive. Unless it has never been open and is in excellent condition, in which case the value for collectors skyrockets.
Even so, the final bidding price is a bit shocking. Last week, the item was sitting at $310,000 with a week left to go. It was expected the game would top $360,000 by the end of the bidding period to become the highest priced collectible game in the history of the human race. And it did exactly that, but it also sold for more than double what the high bid was at the time. 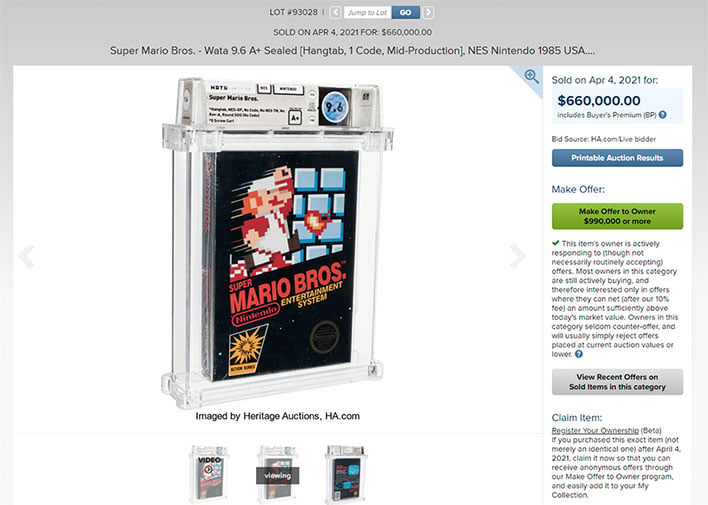 The game was listed for sale by Heritage Auctions, which indicated it was anointed an A+ designation condition (9.6 out of 10 rating) by Wata Games, a renowned grader of games. It was still in its original seal, with the hang-tab intact. Pretty remarkable for an item that was released to retail around three and a half decades ago.

"Since the production window for this copy and others like it was so short, finding another copy from this same production run in similar condition would be akin to looking for single drop of water in an ocean," Valarie McLeckie, video game specialist at Heritage, said in a statement.
The auction house notes that this is the "finest plastic-sealed copy with a perforated cardboard hang-tab" it has ever offered up for sale. It also ranks as the oldest sealed copy of Super Mario Bros. it has offered to date.
"This is only the fourth version of Super Mario Bros. ever produced, and its window of production was remarkably short," the listing states.
Sadly, the listing is woefully short on information about the seller and the history of this exact copy. Was it owned by a one person all these years, or was it purchased from another collector? We do not know. However, history was made, as $660,000 is now the highest price ever paid for a single video game.