I feel pretty good about myself when I accomplish mundane chores, like raking the leaves or organizing my inbox and whittling down my visible emails to just a handful. Then I see something like the latest timelapse that was put together by Elysium Fire, a Minecraft building team, and I get anxiety just thinking about how much work and coordination it must have taken to construct this fantastic world.

It's a sprawling futuristic city "strongly inspired" by Cyberpunk 2077, a highly anticipated open-world role playing game by CD Projekt Red, which is due out next year. Specifically, the builders drew their inspiration from Night City. To be clear, however, it's not a carbon copy by any means, "just an inspiration." It's also massively impressive. Take a look at the timelapese...

One of the people who commented on the video on YouTube said, "That's by far the most impressive build in all of 2019," and I think that is a fair assessment. At the time of this writing, the video has around 2,200 likes and just 15 dislikes, the latter of which is unfathomable to me. And as luck would have it, Elysium Fire just reached 100,000 subscribers on YouTube, though the timing of this build is sheer luck (or "fate"), as it's not intended to be a celebration of the achievement.
"Stroll through the port that receives enough food to feed the huge population of this city that could not otherwise provide for itself. In exchange, it provides cutting-edge technology and exports its know-how. Admire all these lighting effects generated by the many billboards and holograms that overlook the skyscrapers," part of the description reads. 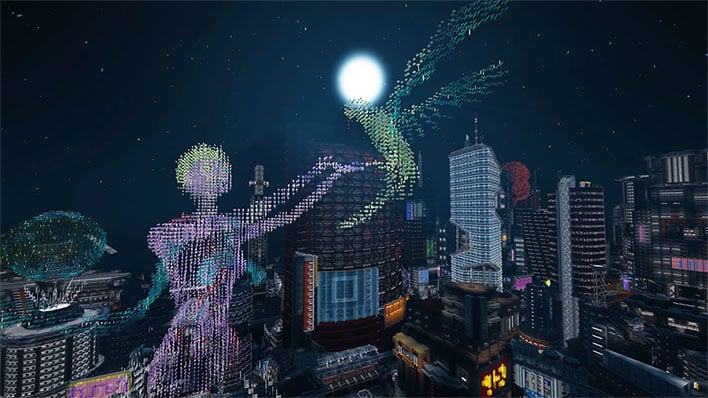 The views from the camera as it pans and flies in between brightly lit skyscrapers and other structures are breathtaking at times, particularly when you consider these are basically rudimentary building blocks (albeit with mods). And then there's the sheer size of it all. This a big city landscape with tall buildings at every turn.
"Discover this city that was built on the forgotten remains of the 20th century, with its megastructures splitting the skies, built chaotically one on top of the other. You will see its industrial zone that sorts its waste, its purification facility as well as its wind farms coupled with a revolutionary transformer that amplifies this unlimited source of energy," Elysium Fire says.
Elysium Fire's 100,000 subscribers is well earned. Their channel is filled with fun videos, including another ambitious project, that being Novigrad from The Witcher 3 (another CD Projekt Red title). I'd contend that this latest timelapse is even more spectacular, but both are worth checking out.