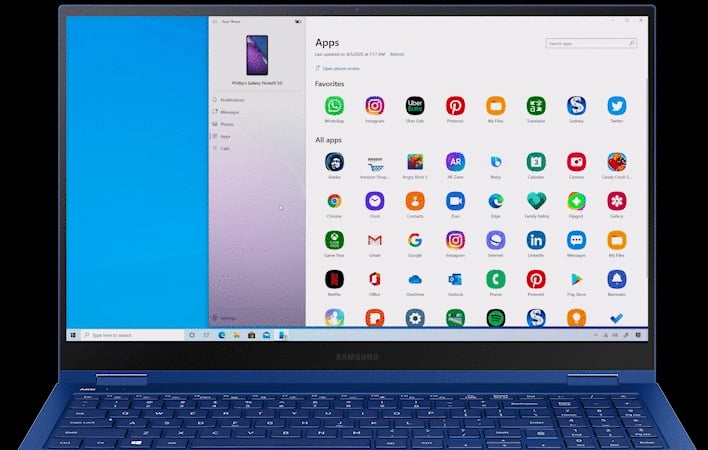 Crazy times we live in, isn't it? No, I'm not talking about virus outbreaks or anything political, though that whole toilet paper shortage was certainly interesting (thankfully it looks like that's well behind us now). Instead, I mean the ability to run Android apps on Windows 10. Not in every situation, but with Microsoft's Your Phone app, it is possible on select Samsung Galaxy devices.
The update is the latest in an ongoing partnership between Microsoft and Samsung, with the two hooking up around this time last year to "empower people to achieve more across new Samsung devices and Microsoft experiences." In a way, the partnership is an admission by both companies that PCs and mobile devices are both relevant.
"Microsoft’s Your Phone app and Link to Windows integration on select Samsung devices, enables you to stay in the flow by allowing you to take calls, check notifications, see photos and messages, all from your Windows 10 PC. Now, on your Samsung Galaxy Note 20, you can access and interact with your favorite mobile apps directly on your Windows 10 PC through the Your Phone app," Microsoft announced in a blog post.
Using the Your Phone app, supported Android apps launch and run in a separate window. You can then control it with your mouse and keyboard, just like a native Windows program, but mirrored from your smartphone.
One of the benefits of this new functionality is being able to pin those Android apps to the Windows 10 taskbar or Start menu, to access them quicker and easier—they'll open and run like a native Windows program.
To take advantage of this, you'll need a supported Galaxy device. There are a bunch of them that are, though, including the Galaxy Note 20 series, Galaxy S20 series, Galaxy S9 series, and a whole bunch of others. You will also need to be running the latest Windows 10 Insider build.