Normally, New Year’s Day is a time to relax, reflect and recover from the previous night’s festivities, but for System Administrators this year, that is not the case. Reminiscent of the Y2K scare at the turn of the century, a new bug has appeared, causing Microsoft Exchange servers to fail and forcing admins to disable some security features as a workaround.

Around 16 hours ago, initial reports on Reddit from people such as /u/FST-LANE explained that Microsoft Exchange servers were struggling after the “Microsoft Filtering Management Service” was stopped. This issue led to mail flow issues and seemed to stem from a series of errors from the FIPFS (anti-malware) service stating that “Cannot convert ‘220101001’ to long.” This error began appearing after the “MS Filtering Engine Update” process got the “220101001” update around 7:57 pm EST. 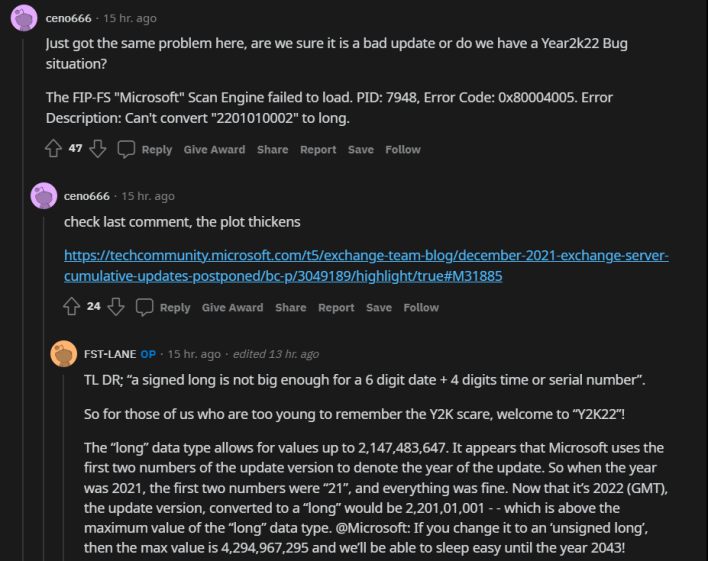 Another Redditor, /u/ceno666, aptly dubbed this issue the Y2k22 bug and gave a link to a Microsoft Tech Community forum user who explained that Microsoft is using the signed long data type for the update code. In programming, longs are data types that hold numbers up to 4,294,967,295 if unsigned (no negatives) and up to only 2,147,483,647 if signed (inclusive of negatives). Subsequently, when the year rolled over to 22 and Microsoft continued to use signed longs, the version number went higher than what is understood.

As it stands, Microsoft has not fixed this issue, but a workaround has been found in the meantime. Administrators are instructed to disable malware filtering until Microsoft delivers a fix and official response. At the end of the day, it is somewhat amusing that relatively simplistic issues like this still exist, and the workaround is to disable a critical filtering tool. Perhaps avoiding mistakes like this should be Microsoft’s New Year’s resolution, but that's probably too optimistic.