Cryptocurrency mining was once just a way to use extra CPU cycles, but it has since become an economy in and of itself with a dark underbelly. Over the years, black-hat hackers have adapted cryptocurrency mining to make money for themselves using other peoples’ resources via malware. This year, Microsoft recorded a spike in this activity, likely fueled by the extreme rise in the price of all cryptocurrencies. Now, the company is working with Intel to help prevent cryptojacking with machine learning and Microsoft Defender For Endpoint.

Cryptojacking is the term coined for when an attacker deploys a crypto-miner as a malicious payload rather than other options such as ransomware. Considering that malware is becoming harder to detect, stomping out these malicious coin miners is incredibly difficult as they can be effective and long-lasting. Thus, Microsoft and Intel have partnered up to implement technology using silicon-based threat detection at endpoint devices. 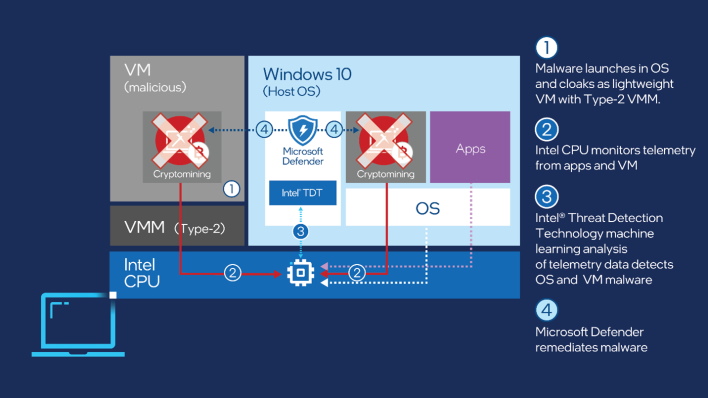 Announced today, Intel Threat Detection Technology (TDT) is being integrated into Microsoft Defender For Endpoint, “an addition that enhances the detection capability and protection against cryptojacking malware.” The Intel TDT utilizes machine learning to directly look at low-level hardware information from the CPU to detect malicious code execution fingerprints. Even with clever obfuscation techniques or hiding malware within virtualized guests, the TDT can still catch malware executing on the CPU.

Of course, this technology only works on the Intel Core or vPro platform from the 6th generation onward, so AMD users are left in the dark for now. Perhaps Microsoft will also work with AMD to create a similar solution, as Intel’s market share is most certainly shifting from what it once was. Either way, it is great to see further research into protecting users and companies alike as malware, and malicious activities become more prevalent.