The report also shows that 183,000 tenants in 175 countries are using Teams for Education as students and teachers embrace distance learning. Another interesting statistic shows that total video calls in Teams has grown by over 1000 percent in March. As for the countries with the most active Teams users, the report found that Norway and the Netherlands turn on video the most with about 60 percent of calls including video. In Australia, video is used in 57 percent of meetings. In the United States, 38 percent of meetings use video. The countries that use video the least in Teams calls include South Africa at 36 percent and India at 22 percent. 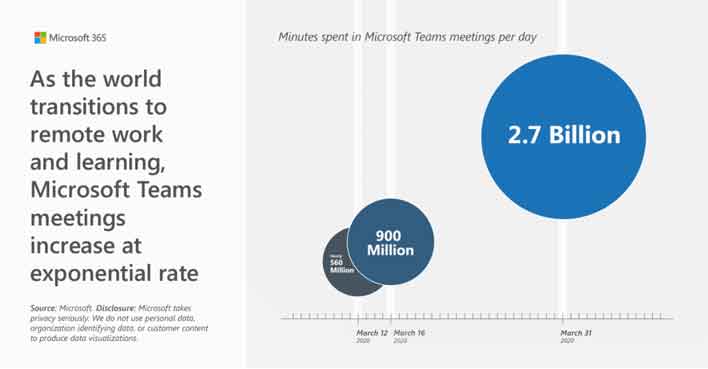 Microsoft attributes that low usage in those countries to less access to devices and the lack of stable Internet connections in the regions. However, Singapore, France, and Japan also have less video use, and those countries have stable connectivity, particularly in Japan, with some of the fastest Internet speeds in the world. Microsoft also took the time to blow its horn on some of the new features it has added to Teams, including custom backgrounds, to allow users to replace their background in Teams.

The new features include a new raise hand feature that Microsoft announced last month to let meeting participants indicate when they have something to say, without interrupting. Microsoft also today released a new feature giving the ability for organizers to end a meeting for all participants with a single button click of the "end meeting" button on the control bar.

Meeting organizers can also start downloading a participant report found in the participant list that indicates join and leave times for the participants in the meeting, something Microsoft says will be useful to teachers. Microsoft also plans to add real-time noise suppression later this year using AI to reduce background noise. Microsoft announced last month that Teams had swollen to 44 million daily users with the rush of at-home workers due to the coronavirus pandemic.