Microsoft Defender Launches To Windows, MacOS, iOS And Android But What Does It Do?

There's a good chance that you're running multiple operating systems across your various electronic devices. Perhaps Windows or macOS on your main desktop PC or laptop, and iOS or Android on your smartphone. And maybe your significant other is entrenched in a different ecosystem than you. Whatever the case, Microsoft Defender is a new security product that Microsoft hopes will make it easier to manage the security of each one.

Some may find the branding a bit confusing because for a long time, Defender was the same name Microsoft had used for its built-in AV protection in Windows. These days it's just called Windows Security. So what exactly is Microsoft Defender? Simply put, it's an online security application for Microsoft 365 Personal and Family subscribers.
"We must evolve our security solutions to meet unique customer needs at home and work by bringing together existing technologies in a new way. That is why we are introducing Microsoft Defender for individuals. It was built on our Microsoft Defender for Endpoint technology, leveraging the same trusted security that enterprises rely on," Microsoft explains. 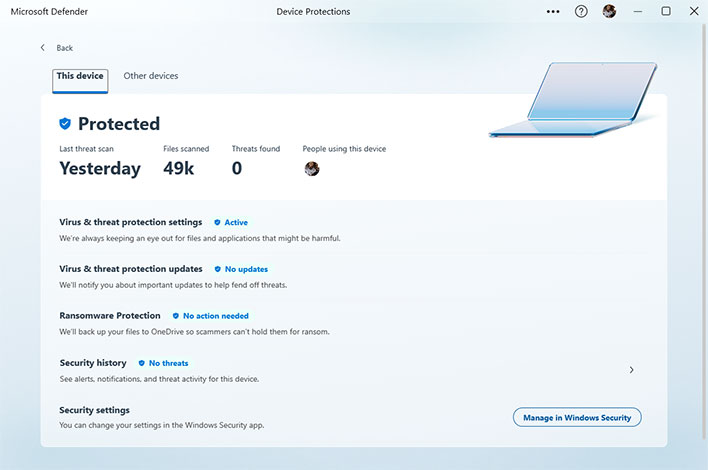 To put it in plain English, Microsoft Defender is partially a dashboard to view and manage security protections on multiple devices for multiple people. It doesn't necessarily require that you or anyone in your family use Windows Security, either—you can view existing AV protection such as Norton or McAfee, or whatever else, and will yield to those programs if they're installed. 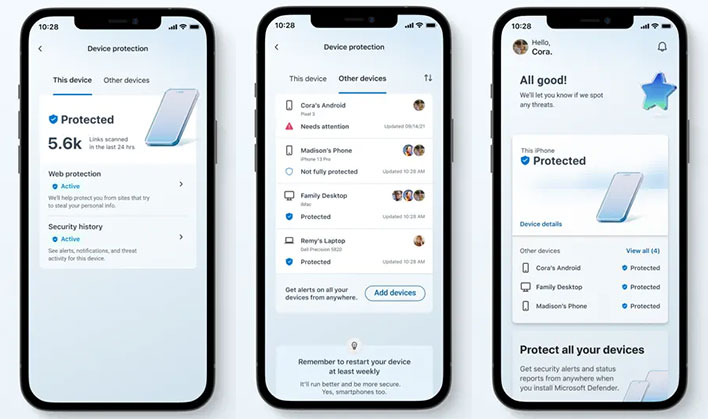 Note that Microsoft Defender is not built into Windows, but is a standalone app that can be downloaded from Apple, Google, and Microsoft app stores. It's functionality as a whole also varies by platform. On Android and macOS, it provides real-time protection against viruses and malware, but on iOS and iPadOS, it does not (though it does offer up a level of phishing protection, as it does on Android as well). And in Windows, it's strictly a dashboard, leaving AV chores to Windows Security.
Since this requires a Microsoft 365 subscription, there is a cost involved. The app itself is a free add-on, but a Microsoft 365 Personal subscription runs $6.99 per month, while the Family option runs $9.99 per month.
For those interested, Microsoft Defender is available now.