A new rumor is making the rounds that fans of the Nintendo Switch should be excited about. A new report claims that the Metroid Prime Trilogy for the Switch will launch next month, with  a Swedish retail site called Inlet listing the game briefly with a launch date of June 19.

The listing on the retail site has since been removed. An accidental retail store listing for video game certainly isn't unheard of, but there's no way to know for sure if the launch will happen on that day or not. If the June 19 release date is true, Metroid Prime Trilogy will launch the same month as Paper Mario: The Origami King, which was a surprise announcement. 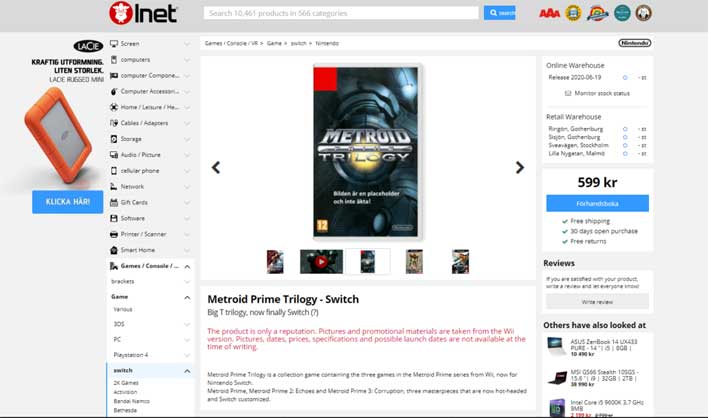 For those unfamiliar with the Metroid Prime Trilogy, the game bundle wraps three separate titles into one package. The games in the bundle include Metroid Prime, Metroid Prime 2: Echoes, and Metroid Prime 3: Corruption. The trilogy launched on the Nintendo Wii in 2009 and was re-released on the Wii U in 2015.

In all three games, players play as the bounty hunter Samus Aran. Metroid Prime has the player exploring a world called Tallon IV, witnessing experiments performed by Space Pirates. Metroid Prime 2 takes players on an investigation of hostile activities between twin planets Aether and Dark Aether, where players learn about a shared energy source vital to their survival. Metroid Prime 3 has players trying to discover information on a sentient virus that almost obliterated the Galactic Federation network.

Nintendo Switch players are also waiting in anticipation for Metroid Prime 4, which has encountered a rocky development process. Nintendo announced in January 2019 that it was scrapping the entire game and starting over with a new development team. Metroid Prime 4 was initially announced at E3 2017, making for an incredibly long gestation period.