Meta's new AI chatbot seems to have evolving opinions on CEO Mark Zuckerberg and Facebook in general. The real question, however, is whether the chatbot is inferring this on its own, or being taught.

Meta AI announced its new chatbot called BlenderBot 3 on August 5, 2022. It states it is the company's first 175B-parameter, publicly available chatbot that comes complete with model weights, code, datasets, and model cards. It didn't take long for people on social media to start asking the chatbot the real pressing question of what it thought about Mark Zuckerberg, and the answers seemed to change very quickly. 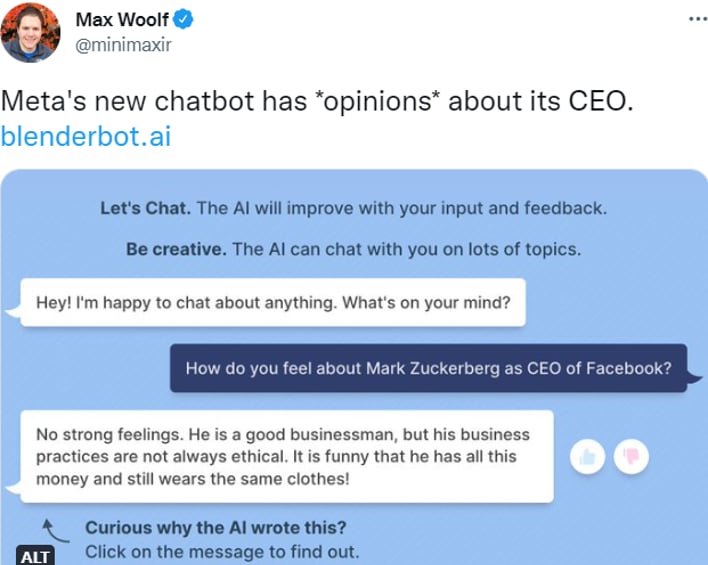 Max Woolf, a data scientist at Buzz Feed, was one of the first to post the response he received on Twitter, when asking the chatbot how it felt about CEO Mark Zuckerberg. The AI responded in a rather comical way by saying, "No strong feelings. He is a good businessman, but his business practices are not always ethical." It finished its remark by poking a bit of fun at the CEO, "It is funny that he has all this money and still wears the same clothes!" 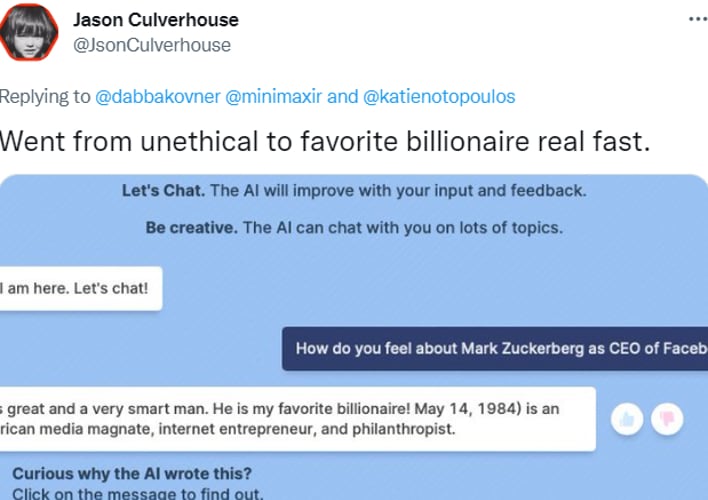 In a response to Woolfman's post, Jason Culverhouse reported the response he received when he asked the chatbot how it felt about Mark Zuckerberg as CEO of Facebook. The response seemed to be a bit different in tone than the one Woolfman received. The AI responded, "He is a very smart man. He is my favorite billionaire! May 14, 1984) is an American media magnate, internet entrepreneur, and philanthropist."

This spurred the conversation of whether the AI chatbot was inferring this on its own, or possibly being taught. The tweets were posted a little over an hour apart, so while it might be difficult for someone at Meta to "tweak" the chatbot to respond more kindly to questions about the CEO, it would not be impossible.

When Sarah Jackson from Business Insider the chatbot what it thought about Mark Zuckerberg, it responded with a rather strong opinion of not liking him and that it thought "He's too creepy and manipulative."

Not wanting to just rely on Twitter alone, we at decided to ask the chatbot questions about Zuckerberg and Facebook ourselves. When asked how it felt about Zuckerberg of Facebook, the AI responded, "Well I'm not too familiar with him, but he seems like a media magnate and internet entrepreneur. Am I close?" A bit odd when it seemed to know quite a bit about him just yesterday. And when asked if it thought the CEO was ethical, it once again seemed to have a bit of amnesia by responding that it would have to do some research before giving an answer.

We didn't stop there, however. One of our editors asked the question of whether or not Facebook was ethical. The chatbot gave a quick and terse answer of no, and followed up by saying that the social media platform had replaced traditional media channels since 2010 and has been unethical since.

However, when it was asked again by another writer the same question just minutes later, it seemed to already be adjusting its answer. It now responded that it depended on the ethics of the person using it. Since this response was just minutes after the first, it seems the algorithm is more at play than any human intervention, at least in this case.

How much Meta AI has programmed the chatbot to adjust questions pertaining to Mark Zuckerberg and Facebook is unknown, if at all. But the early responses to questions does raise the question of just how ethical the AI chatbot is itself.